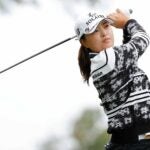 Jin Young Ko hits a tee shot on the 2nd hole during the final round of the Cognizant Founders Cup.

For starters, remember that Jin Young Ko has been here before, so the record she’s attempting to break in the first round of this week’s BMW Ladies Championship shouldn’t cause too much stress.

Ko, who is coming off a victory at the Cognizant Founders Cup, needs to shoot in the 60s in her first round at LPGA International Busan in South Korea come Thursday to set the LPGA Tour record for consecutive rounds in the 60s. She tied the record of 14 with her final-round 66 on Oct. 10, but one more and she’ll own the record by herself. She’s currently tied with Annika Sorenstam and So Yeon Ryu.

Ko said she was aware of the record at the Founders Cup and turned it into motivation.

“Of course I will be happy to break a record and make a new record,” she said. “I think it’s really important for me to focus and concentrate on my game and also enjoy the game, and I think that at the end of the day, the records will be determined by how I play on the course and what kind of attitude I have. So the pressure is there, but I think that I can keep the pressure in check. And I also think that having that ambition, I guess, to break records and that desire is also what drives players in general to be better.”

Ko’s Founders victory was her third of the season, and all of them have come in her last six starts. Two of her other three starts in that span were a T2 and T6.

Back in 2019, Ko set another impressive record, playing 114 consecutive holes without a bogey. That even snapped Tiger Woods‘ PGA Tour record of 110.

The BMW Ladies Championship can be streamed on the NBC Sports App or on GolfChannel.com from 11 p.m. to 3 a.m. ET on Wednesday through Sunday morning. The tournament will also be aired via tape delay on Golf Channel from 2-5 p.m. on Thursday and 6-10 p.m. on Friday, Saturday and Sunday.