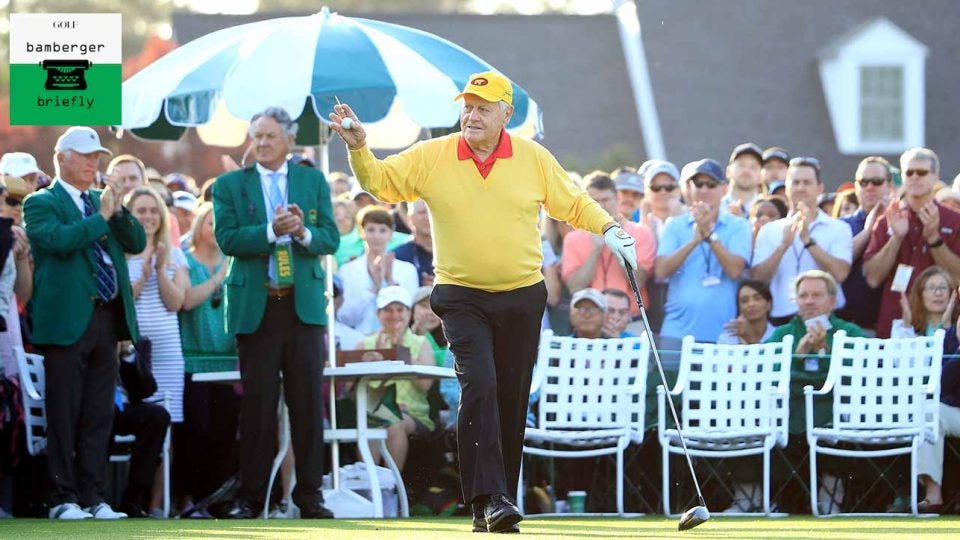 As much as Jack Nicklaus loves the Masters, another Augusta National event now captures his attention.
Getty Images

Ed. note: Well, Big Jack still has the record on a solo basis! Tiger Woods will have to wait until November to try to match Nicklaus’s six Masters titles. This week, Bamberger, Briefly will comprise a series of five short pieces in which the 18-time major champion will opine on this and that. Michael Bamberger welcomes your comments and suggestions at Michael_Bamberger@golf.com.

Yes, there are members of Augusta National who can shoot lower scores than Jack W. Nicklaus can these days. Jeff Knox, a noted Augusta amateur who has played as a marker when there is an odd number of Masters weekend contestants, can break 70 from the members’ tees. So can Jimmy Dunne, the president of Seminole. As can Michael McDermott, an accomplished Philadelphia amateur. Fred Ridley, the club chairman, is a 3-handicapper and can go low.

But let’s give Jack the break he has earned. He’s 80, for one thing. Also, as a competitive golfer, he had an unrivaled run: 20 major titles, amateur and professional, between 1959 and 1986, including his six green jackets. Five, you might be interested to know, are symbolic. People say that Tiger has five coats. But he really has one.

Nicklaus played in his final Masters in 2005. He plays every year in the Wednesday afternoon Par-3 tournament. On Thursday morning, he and Gary Player launch the tournament’s ceremonial first shots. He said in a recent interview, he would be open to playing the entire front nine, if the club wanted that, as Sam Snead and Byron Nelson used to do—“but not from the back tees,” Nicklaus said, being both humorous and serious. He noted that Augusta National only has one set of tees. Nicklaus said his preferred length for at his Bear’s Club course is 6,000 yards.

But there is still one annual event at Augusta National that brings out Nicklaus’s famously competitive side, and that is the club’s annual member-member March event called The Jamboree, which was canceled this year. Everybody is assigned a handicap for the event.

Generally speaking, professional golfers, regardless of their age, are loathe to acknowledge having or needing a handicap, unless there’s money on the line. Then they will happily accept shots. Sam Snead was famously like that. Nicklaus is not. “I’m a five or a six,” he said.

When he started talking about his play in recent Jamborees, you could immediately see one of Nicklaus’s most important traits: he cares.

“Peyton Manning and I have played in the Jamboree [together],” Nicklaus said. Manning is a member of Augusta National as well.

“Peyton is probably a five or a six. We played in it I think twice and we had a chance both times. I choked coming home. I wouldn’t put it on Peyton. I didn’t finish very well. They have two prizes, gross and net. The main prize is net. Five or six, that’s not enough for me. But several years ago I shot 72. I haven’t been able to live down that reputation since then. People say, ‘You’re a five?’ And I say, ‘If I play well, I might break 80.’”

Well, that’s OK. For a long, long time, when Jack Nicklaus played Augusta National well, he signed for something in the 60s, and the whole world took notice.

2021 Zozo Championship live coverage: How to watch the final round in Japan
Go to mobile version