It’s a One-derful Life: An Ace Unites Father and Son Once More 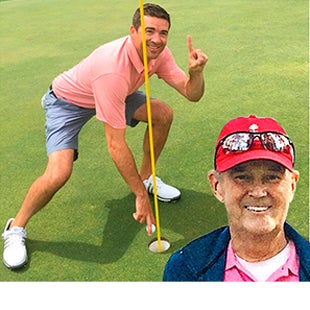 Big Bergy was the happiest dentist you ever met. Every morning in Billings, Montana, he rarely made it past breakfast without gushing, “Every day’s a bonus day!” And that’s how he lived, as though life was some sort of forgotten present he got to reopen every day.

“I loved him like a dad,” says John Moscrip, a friend of Big Bergy’s son, Robb (Little Bergy). “He was just one of the greatest people ever. He was a rock—loyal, positive, a wonderful influence on me.”

Big Bergy could have fun at a colonoscopy, but his favorite thing to do was to go to the Whitefish (Mont.) Lake Golf Club Fourth of July tournament. He was the official main merriment manager of it. He and Little Bergy hadn’t missed it in 22 years. Seeing Big Bergy careening around in his cart handing out cold beers and warm laughs was half the reason people came to the thing.

So when Big Bergy up and died this April, at 66, it punched a hole in a lot of people, especially Robb, 39, and all his buddies.

During the Tuesday practice round this year in Whitefish, 20 of them—all wearing Big Bergy memorial T-shirts—gathered at the fourth hole, broke out some champagne and scattered his ashes right on the tee box.

“The fourth hole was my dad’s favorite,” Robb says. “You’re hitting straight into Whitefish Mountain, and there’s a lake on the left. We all said this hole is where my dad belonged.”

Fast forward to Saturday. Robb is in the hunt to win the event. Last round, fourth hole, 207 yards. Four-iron. Flushes it.

“I’m on the 15th tee—it’s right near that green—and I swear I hear a ball hit the flagstick,” Moscrip says. “I look back and see Robb hugging people. I’m like, “Oh, my God. That has to be Bergy!” So we run to the green just as Robb’s getting there.”

And there was the ball in the hole. An ace. On Big Bergy’s favorite hole, with his ashes still feeding the tee.

There aren’t many times in life when you see grown men turn into human puddles, but it happened. Robb started crying. Moscrip was bawling. Justin Miller, who was actually leading the tourney, came running up to the green and joined the soggy dogpile.

“I couldn’t really play any more after that,” says Miller, who teamed with Robb on the University of Washington golf squad. “I cried for the next three holes. I couldn’t get it together. It was just so emotional. To have Bergy’s son ace that hole, where we’d just spread the ashes, I couldn’t believe it. I lost the tournament there and, honestly, I couldn’t have cared less.”

Word got around the course faster than Big Bergy’s cart could’ve ever gone. Little Bergy had aced Big Bergy’s hole! With his dad’s ashes under his feet! Everywhere you went that day, people would show you the goose bumps on their arms.

“By the time I was on the fifth fairway, people were coming up asking if it was true,” Robb says. “Everybody was crying, hugging. It was surreal. I still don’t know how it went in. It was a 4-iron that never got higher than my head. It was coming in like a rocket. It’s not gonna land soft. It flew straight into the hole and yet, somehow, it didn’t tear the hole up.”

And that was the first and only time Robb had marked his ball with the initials RWB—his dad’s initials. Imagine that.

I’m still not a religious man, but something was on that ball besides groovespin. Divinity? Karma? Or just Big Bergy wanting to keep the fun rolling?

“I believe in miracles,” says Big Bergy’s widow, Linda. “And what happened that Saturday was a miracle. Bob had to be there. He had to. That’s all there is to it.”

Talk about a bonus day.