In golf, picking a winner from a full field of players is more than hard enough. Picking two winners in the same day—in the same bet? That’s nearly unheard of. But one bettor from County Mayo, Ireland scored big on Sunday when his two-player parlay cashed in for a five-figure win.

BoyleSports, Ireland’s largest independent bookmaker, announced on Monday that a customer, who wished to remain anonymous, had placed a 10-euro bet that required two winners: Xander Schauffele at the WGC-HSBC Champions as well as Cameron Champ to win the Sanderson Farms. That didn’t mean one or the other could win; both needed to for a full cash-out.

Schauffele looked like a longshot with just two holes to play, but birdied 17 and 18 to force a playoff with Tony Finau. He birdied the first playoff hole to hoist the trophy. That meant the savvy Irish punter just needed the 23-year-old Champ to hold onto a four-shot lead in Mississippi. 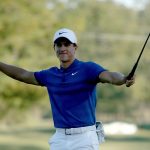 You may also like Tour Confidential: Who will be the breakout star of 2019?

That wasn’t always a sure thing, either. Champ looked unsteady on the front nine and turned in 1-over 37, relinquishing his advantage. Corey Connors surged into a share of the lead with several birdies of his own, and the tournament’s result hung in the balance. But then the Tour rookie turned on the jets, making birdie on five of his last six holes to win by four.

Schauffele went off at around 50-1 to win in Shanghai, while Champ was listed around 65-1 at most sportsbooks. When combined, BoyleSports paid out the winner at more than 1000-1. The bettor walked away with €10,950, which converts to roughly 12,500 U.S. dollars.

A BoyleSports spokesperson was duly impressed with the prediction. “A golf double is no mean feat and we have to tip our hats to the Mayo punter who correctly predicted wins for Cameron Champ and Xander Schauffele in their respective tournaments transforming their €10 into an impressive €10,950 in the process,” Aioffe Hefron told the Irish Mirror.

The Sanderson Farms win was Champ’s first on the PGA Tour, while Schauffele has won twice before.