Inside the Natty Shack, a college football style tailgate at the Masters 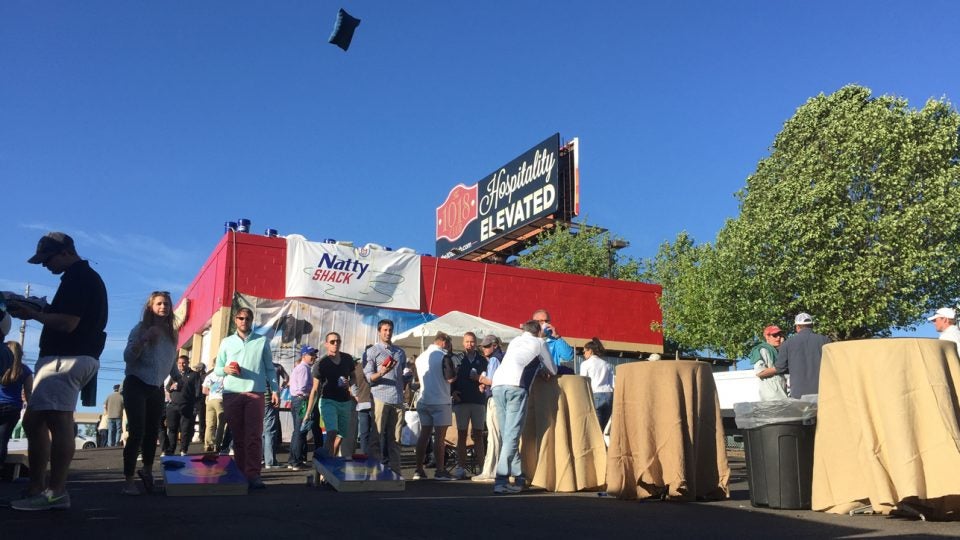 AUGUSTA, Ga. — On Friday evening, as some of his best friends tried to break par at Augusta National, Smylie Kaufman arrived at a Midas shop less than a mile from the club and pushed his thumb against aluminum. He was cracking a beer.

Instead of navigating Amen Corner like he did a year ago—he sagged into a tie for 29th after shooting 81 in Sunday’s final pairing—Kaufman is spending this Masters weekend in a storefront that has been converted into a frat-house-themed hospitality space dubbed the “Natty Shack.”

With free beer, a community pig roast, club music, televised golf, and an assortment of lawn games, Natural Light (a college-kid favorite from Anheuser-Busch) has joined the fun of Masters week. In the process, it has created an amusing juxtaposition, a brash, low-brow party just outside one of the most buttoned-up institutions in the sports world.

“The Masters, obviously, is an event that doesn’t get catered to the age group of 21 to 27,” said Chelsea Phillips, VP of US Value Brands. “It seemed like a good place for us to come in and offer something to fans that are here and really aren’t being spoken to.”

That’s where Kaufman comes in. He’s “spoken” to the demographic well in the past, most notably last year during a spring-break mancation hashtagged #SB2K16, where he, Jordan Spieth, Rickie Fowler and Justin Thomas had one helluva time down in the Bahamas last April. Less than four months later, Kaufman became the first athlete endorsed by Natural Light since baseball Hall of Famer Mickey Mantle in 1980.

“They were looking for a college-looking—I still look like I’m in college,” Kaufman said. “Especially when I shave.” And so, with their fresh-faced pitchman locked in, Natural Light set to create a college-party setting, which is how you find Kaufman smiling, posing for photos on a Natty Light throne, an image with another heavy juxtaposition. If Kaufman had it his way, he wouldn’t be 600 yards from Augusta National.

No, he’d rather be driving down Magnolia Lane, trying to make amends for the 10 bogeys he made in his final 16 holes last year. “The plan was all along for me to be playing the golf tournament, still coming here and stopping by and meeting some fans,” Kaufman said. “Obviously, the main thing for me is I want to get back. This is fuel to the fire. For me, coming here, it almost hurts me worse, but I’ve got a lot of work to do.”

The 24-year-old pro is currently ranked 165th in the world after missing six straight cuts. Work will have to wait for now, as the Natty Shack calls for Kaufman’s time. Considering where he was 365 days ago, he’s a quality host, amiably posing for photos and sipping the suds.

The setup, which was built in its entirety Thursday, includes three televisions inside the shop, encircled by a college apartment staple: second-hand couches. Nearby sits the Natty Light throne, a photo prop of Animal House proportions.

Out in the parking lot, a full scale pig roast, a DJ spinning from the bed of a truck, an RV from Barstool Sports (the event is stop no. 2 on the Natty Tour), cornhole games and another line of televisions and second-hand couches. Only a handful of Natty Shack attendees actually watch golf. Kaufman, admittedly, is getting tournament updates via text from a buddy. “I’d be lying if I said I’d rather not be playing right now,” he says.

Here, golf exists in the background like a noon football game at a college tailgate. On one side of these TV screens, there are strict rules: no running, no cell phones, no cameras on competition days, no large backpacks. On the Natty side, you have three bros in a Midas parking lot vibing to Lil’ Wayne’s “Swag Surf.”

Natural Light is taking a pointed jab at Augusta National’s self-reverence. Phillips says they want to “poke beige in the eye,” while creating this most obvious contradiction against an event where the sound of a chirping bird is cherished. Not many Masters fans would call this tournament beige. But ask a recent college grad if they’d like to ring in Masters Saturday like it’s a fall Saturday and they might in fact be up for it. Natural Light believes there’s value in the overlap of that Venn diagram. Friday’s RSVP-only event drew 400 people, with even more expected Saturday.

“We like to have fun with things that traditionally are a little stuffier or thought of as not necessarily for this target,” Phillips said. Can the green jackets be thrilled about the hip-hop blaring subwoofers just a few blocks away from their property? Probably not, but for a number of folks who live in and around Augusta, or those (Kaufman included) just here for some good times, the Natty Shack certainly is a refreshing sight. Take, for example, the parting words of an Arby’s server who catered the party.

He served 150 meals that were consumed, college-style, in 15 minutes. “I’m working today,” he said. “You better believe I’ll be here tomorrow, though, and I’ll be a different person here tomorrow.”