Jordan Spieth at Augusta National, where he spent a few days this week with his father and agent.
Sports Illustrated/Kohjiro Kinno

World No. 1 golfer Jordan Spieth has enjoyed plenty of good days in his remarkable 2015 season, but it’s doubtful that golf’s reigning superstar will be able to top this week when it comes to special memories.

Something about hanging out with a World Golf Hall of Fame member, a former President of the United States, then taking your dad for a little father-son golf at Augusta National Golf Club will do that for you.

First there was an intimate breakfast and Q&A with Dallas legend Lee Trevino and former President George W. Bush for First Tee of Dallas supporters at Bush’s presidential library. Then an overnight in an on-site Augusta National member’s cabin, a few Masters-style meals and rounds on the big course and par 3 with your dad; it was another chapter in the book on why it’s good to be Jordan Spieth.

“It’s something I’ve never done, but wanted to,” Shawn Spieth said before the father-son road trip, along with Spieth’s agent Jay Danzi. “I was hoping it could happen. I know somebody who can help me.”

Thursday morning, under 60 degree temperatures and overcast skies, Spieth, his father, a Dallas businessman who lives a few miles from his son, and Danzi strode over from a multi-story member’s cabins to the first tee at Augusta National, which Spieth humbled in April for a four-shot wire-to-wire victory.

Spieth planned to spend the weekend at Augusta National working on his game for a 2016 title defense and playing with ANGC member and fellow Dallasite, AT&T CEO and Chairman Randall Stephenson, one of Spieth’s main commercial sponsors.

After playing in last week’s Hero World Challenge in the Bahamas, Spieth, a huge Dallas Cowboys fan, got back home in time to see his beloved team pull out a last-second Monday night victory over the Washington Redskins, tweeting out to his 975,000 followers, “I need a Dan Bailey jersey,” after the Dallas kicker booted a last-second game-winner.

Spieth was up early Tuesday for the First Tee Event, “Breakfast and Conversation with the President and Lee Trevino,” on the SMU Campus.

Spieth’s girlfriend, Annie Verret, works for the First Tee of Dallas as an event coordinator. Bush is the honorary chairman while Trevino is a longtime supporter whose daughter Olivia helped organize the event.

“It was really special we could do something like that,” said First Tee business development manager Katherine Helms. “We have never done anything like that, but it was pretty amazing with all proceeds going to aid our first tee programs locally.” 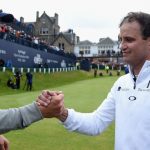 You may also like Zach Johnson: Why Jordan Spieth Deserves to Win SI Sportsman of the Year

The format had Bush interviewing Trevino about his career on-stage where, not surprisingly, the Dallas golfer did most of the talking. Near the end of their time together, Spieth was coaxed up from the audience for a few questions and a most unique three way sports talk fest.

“A lot of credit goes to Olivia Trevino and President Bush’s office for making it happen,” Helms said, “and Jordan for being there.”

Spieth doesn’t have any professional golf planned until he arrives in Maui for the Hyundai Tournament of Champions at the Kapalua Resort, Jan. 6-10, 2016, but he can’t say he didn’t end 2015 on a very high note.