If You Are Lucky, Your Spouse Understands the Game Is a Fever That Must Be Fed 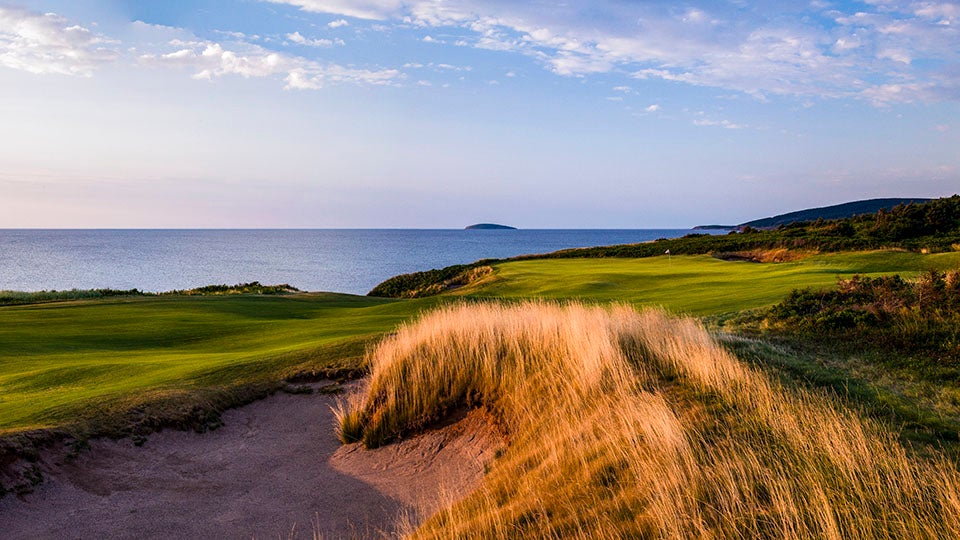 The missus and I, married 25 years ago today, spent the first summer of our married life in Scotland. For our silver anniversary we came here, to New Scotland, where the village signs are in English and Scottish Gaelic. There were days in that summer of ’91 that I played 36 — in St. Andrews, in Gullane, in Machrihanish. Christine was not then or now a regular golfer, but she has had a general tolerance, and even enthusiasm, for my golf. During our courtship, she would clip New York Times game stories by Gordon S. White Jr. — the third round at Akron, that sort of thing. Young love.

We all know how it goes. The other day I told Christine that I had a game at Pine Valley. Golf there is an all-day affair. “Great,” she said. Great is a funny word. Tone tells all. But by Jimmy Fallon and lights out, she had had a good day, and I had, too. All’s well that ends well. If you’re lucky, you have a spouse who understands that the fever must be fed. I have found it runs at different temperatures in different seasons, and in different years.

Christine is our family travel agent, and she timed our trip here so I could play Cabot Links, in Inverness, before the holes got filled for winter. I was the last man out on the last day of the season. The afternoon was cold and nasty—beautiful, in its way. It’s a fine and unpretentious course, lodged between the sea and the road, as so many of the originals are, back in the old country. I’ll cite just two here, the Old Course and North Berwick, which Christine walked with me in our first married summer. We have books about Scotland at home with wildflowers pressed between the pages that she plucked along the way. At Cabot, heavy metal rings at the bottoms of the cups hold the flagsticks in place. You know what the Scots say: Nae wind, nae golf. While I played it as a singleton through a gray breeze, Christine drove the Cabot Trail. No birdies, no moose. Still, a good time.

The day after our wedding, my maroon Dodge Omni died en route to the airport. We got to JFK about a half-hour before our flight, and airport security allowed me to bring my golf bag onto the plane like it was a backpack. We went to the island of Hispaniola, which is the Dominican Republic on one side and Haiti on the other. We were in Haiti on All Saints’ Day, a voodoo holy day. My first round as a married man came at the Teeth of the Dog course at Casa de Campo, in the Dominican. On the first hole, I hit driver on the screws, pured an 8-iron and was left with an uphill grainy eight-footer that I saw one way and my caddie another. I deferred to his expertise and was one under through one. And the gallery goes wild! Christine celebrated the excellent start, anyway. Later, we bought black-market gasoline from the caddie, in one-liter Evian bottles. We’ve been traveling ever since.

Our summer together in Scotland came after my brief stint working as a caddie on the European Tour. I have made more great friendships from that trip and its aftermath (a slender book) than I deserve. In Dornoch, a club caddie, Sandy Matheson, invited Christine and me to join him and his wife for a home-cooked dinner. Poached salmon and boiled potatoes, scotch for dessert. I am typing this in a bay-front cottage owned by friends. In the local grocery store yesterday, we looked for fresh fish but found only frozen smoked salmon, which Christine folded into her pesto sauce, served last night on whole-wheat penne, topped with crushed cherry tomatoes. The wine was from Australia. (How great is this shrinking world?) We’ve had scores of meals over the years with friends where the menfolk started and ended the evening on the game while the ladies addressed lesser matters, like child rearing.

Twenty-five years ago (or near enough), Christine and I took an all-night caddie bus to get from a tournament in Tarragona, in Spain, to the next one, in Póvoa de Varzim, in Portugal, on the spectacular links course there. There was nearly a riot when the on-bus entertainment turned out to be Herbie Rides Again, in Spanish. We’ve been driving the hills of Nova Scotia in a four-door white Chevy rented from Budget. You can hear Canadian French on the car radio.

Last night we played fireside Scrabble while listening to a Hoagy Carmichael CD found on the bookshelf. When I made P-U-R-E-D, Christine started to challenge it, but I used it in a sentence, and my bride of 25 years accepted the word, as she has accepted me.