‘If I get myself in contention, I think I will win my fair share’: Tiger looks ahead to 2019 in exclusive Q&A

Tiger Woods played 18 tournaments in 2018, including all four FedEx Cup playoff events. He spent a whirlwind week in Paris at the Ryder Cup. He hosted his own event in the Bahamas, then hopped a jet for Melbourne to help generate buzz for the 2019 Presidents Cup. If Woods (and his fused back) sounds like he overextended himself, that’s because he did, especially toward the end of the season. “I played too much,” he told GOLF.com in an exclusive interview at Royal Melbourne last week. “My body wasn’t prepared for that.” Still, the year was a resounding success by just about every conceivable measure. (Well, almost every conceivable measure — right, Phil?) During a quiet moment at Royal Melbourne, Woods discussed his expectations for 2019, the most underrated shot of his career, and the most “special” round he’s ever played.

You’ve had a few weeks to digest your loss to Phil Mickelson at The Match. Does it still sting?

We’re here at Royal Melbourne, where next November you’ll serve as captain of the U.S. Presidents Cup team. Are than any lessons the U.S. team learned from its Ryder Cup loss in Paris that you’ll apply to the Presidents Cup?

We’ve just got to play better. We were outplayed in Paris. [The Ryder Cup] is an event in which there are big momentum swings. It’s about getting those right putts to go in at the right time and get the momentum going in our direction.

You had a busy 2018, including a full slate of Tour starts. How would you assess how your body held up in the wake of your spinal fusion?

I’ve admitted I played way too much at the end [of this year]. My body wasn’t prepared for that. At the beginning of last season, I was just hoping to get through the West Coast swing and get to Florida. Certainly, I don’t foresee myself playing as much as I did this year. This next year is about peaking at the right times and staying fit and getting strong in the gym. I feel I know how to play the game, it’s just a matter of getting strong enough.

Let’s shift gears for a moment. If you could steal one part of any player’s game — any player ever — what would you make your own?

Well, it depends. In that era, 280 was a long drive. Now it’s, “Hey, can you carry it 320 in the air?” The game has evolved and, I was telling some [people in Melbourne], when I came down here to play the Presidents Cup in 1998, some of the guys were transitioning out of persimmon. The game has changed dramatically since then.

What’s the best piece of swing advice you’ve ever received?

I wouldn’t say there is one, because I’ve had several instructors throughout the years. I’ve also received so many different titbits from all the greats throughout the game.

In a book published last year you revisited your landmark 1997 Masters victory. Two years from now can we expect a 20-year anniversary account about your 15-shot win at the 2000 U.S. Open?

I haven’t even thought about that. [Laughs] That would be an interesting idea. It was a special week. I played some pretty good golf at that time.

People cite the chip-in on 16 during the 2005 Masters, or that triple-breaking putt during the 2001 Players as your greatest shots. What is your most underrated shot?

I think the greatest feeling shot was at Hazeltine [2002 PGA Championship, second round, 18th hole]. Out of the bunker, with a 3-iron. It was a sidehill lie … that was the best-feeling shot I’ve ever hit in competition. Man, it felt so solid, so pure and it had such a great flight to it to get it up there. The great part is, I made the putt.

What your most memorable round with a celebrity?

I wouldn’t say there’s one round. I’ve played with premiers, prime ministers and presidents. But I think having an opportunity to mingle and talk to [Nelson] Mandela when I played in South Africa in ‘98 … I remember my dad and I went to his home had a great lunch with him. That was one of the most important moments in my life because I got a chance to meet someone I thoroughly revered and looked up to. From all the things he had to endure, he came out with a great ability to lead an entire country — unify them. That to me is more special than any round I’ve ever played.

Do your kids, Sam and Charlie, have any interest in following in Dad’s footsteps?

No, not really. They’re keen into soccer; if they want to play golf, that’s great. If they don’t, that’s fine, too. As long as they have a good time playing sports. I find that a lot of fun now, to be able to physically get out and pass the ball around with them. I get such a big kick out of watching them compete and play. It’s so much fun to see how happy and passionate they are about soccer. 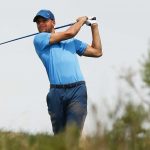 Your 2018 included a win at East Lake, two runner-up finishes, including at the PGA Championship, seven top 10s and a second-place finish in the FedEx Cup. Does all that success raise your expectations for the majors in 2019?

My expectation is to compete again and play. If you’d given me [those results] this time a year ago, my expectations were totally different. I was just hoping to finish an event. So, 2019 is going to be exciting for me, knowing I can play and compete at the highest level again.

You must be particularly excited about the first three majors of 2019 — given your history at Augusta National, Bethpage Black and Pebble Beach.

Well, I’m excited about the major championships in general. I had a couple opportunities this year to win, and hopefully next year [that will continue] with the venues being Augusta, Pebble Beach and Bethpage — all places I’ve won at. It’s about playing well at the right time, and I’d like to do that.

So what does a successful 2019 look like for you?

I had one win this year. It was amazing to have [2018] culminate with the Tour Championship. I’m not going to win every tournament – I never have. But if I can just get myself in contention, I think I’ll win my share.