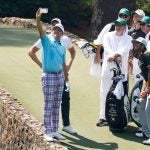 Ian Poulter pauses for a photo during a practice round on Wednesday at Augusta National.

Some pros have been to Augusta National dozens of times by now, either to play the Masters or through invites from members, but that doesn’t mean the mystique ever wears off.

Ian Poulter is about to play in his 16th Masters and also visited the club a few months ago to play a round with his son. A day at Augusta with family and friends is much different than preparing for the Masters, though, with Augusta National (mostly) unlocked in all of its glory.

Poulter met with a dozen or so media members via Zoom on Monday for a 45-minute conversation that was facilitated by Mercedes-Benz, a global sponsor of the Masters. Poulter, a Mercedes-Benz ambassador, discussed his Masters prep, the course, his experiences, and even offered swing tips. He also described how he would spend his “dream day” at Augusta National. And, yes, of course, it includes a trip to the storied wine cellar (with one spendy wine in mind).

“Well, let’s start out first thing in the morning. I’ll go to breakfast in the grill room, because they do an incredible breakfast,” Poulter said. “Then I’d go play the Par-3 Course, because that’s just too much fun to miss, then I’d go back in for maybe a little bit of soup, maybe half a sandwich and some French fries, then straight to the driving range, hit a couple of shots, tee off 1, play 18 holes, come back in, have a nice filet steak, pop down to the wine cellar and pick up a bottle of, ahh, let me see, Lafite Rothschild, and be very, very happy chilling in one of the cabins and put my feet up and be a very happy man. Didn’t sound like a bad day, did it?”

Poulter, who has made the cut in 14 of his 15 Masters appearances, has finished in the top 10 three times at Augusta National. (He always brings family, but he also brought his dogs with this year, hoping they’ll bring him some luck.) Poulter’s grouped with Brian Harman and Brendon Todd for the first two rounds. They’ll tee off at 9 a.m. ET on Thursday.