‘I was like, oh, god’: Dustin Johnson takes on tree head-on 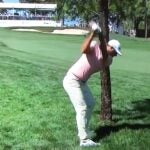 Dustin Johnson hits his second shot on Friday on the 9th hole at Innisbrook.

Dustin Johnson did not see the forest through a tree. He saw the green.

In one of the more dangerous shots you’ll see, and also one of the more deft, Johnson put to test the old golf theory that swears that trees are made of air. On the par-4 9th at Innisbrook, during Friday’s second round of the Valspar Championship, DJ was not denied by a somewhat shorter tree about a yard in front of his ball, swinging into it and sending his second shot just over the green 114 yards away.

“That’s a dangerous shot,” analyst David Feherty said on the Golf Channel broadcast. “The club can break; it can go anywhere; hurt your wrists or your forearms.”

It appeared both iron and Johnson were good. After impact, which stopped his follow-through almost immediately, Johnson jolted momentarily, took three steps back and followed his ball. The two-time major champion then started walking toward it, and he eventually chipped on and two-putted for a bogey five.

“When I walked up, I was like, oh, god, this could be a broken shaft just because — DJ’s not the type of player that’s going to back off from a shot like that,” on-course analyst Notah Begay said on the broadcast. “I knew he was going to get in there and see if there was a little window for him to attack the flag, but the shaft was going to be in jeopardy. But I’m not sure it stayed intact. We’ll see.”

“Well, he hit it hard. He went right after it,” Feherty said. “Yeah, he got a lot of power out of it. Modified finish and it just snapped back off of that tree trunk.”

But why hit such a shot, announcer Dan Hicks asked. Analyst Gary Koch was reminded of a similar effort by Tiger Woods, on the 11th hole during the final round of the 2007 Masters.

In that instance, Woods’ iron snapped.

“Went ahead and did it and the club broke on him,” Koch said on the broadcast.

“One thing is, as you know, these guys have no back-off in them,” Begay said. “Talk to Tiger, Dustin, talking about players that have held the No. 1 world ranking for a while, they achieve those heights for a reason — they’re just not ever going to back off. If they can save a shot by taking a chance, even at times putting your body in jeopardy, they’re certainly going to do it.”