How to Escape a Buried Lie 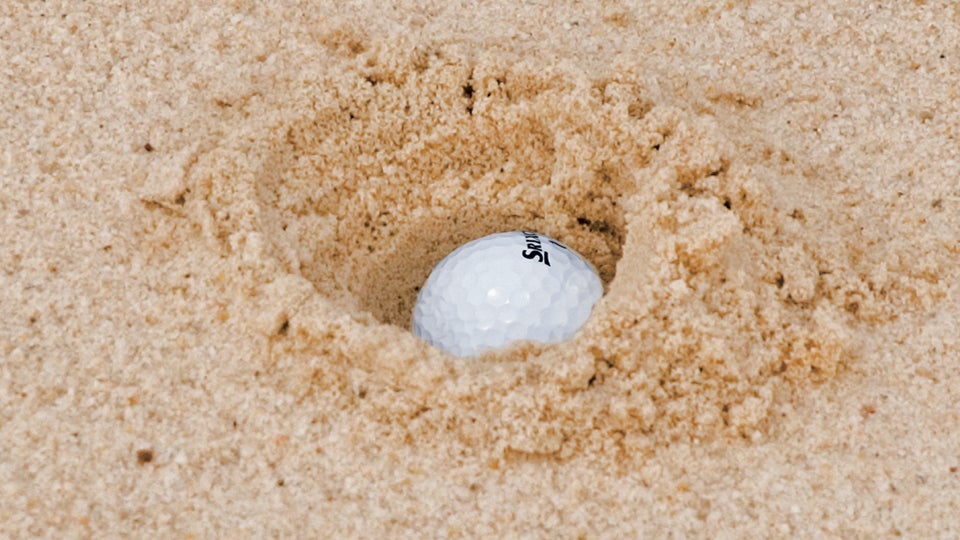 The ball can bury, but it can't hide—if you know how to chop it out.
Leonard Kamsler

You’ve reached the point where you can consistently blast the ball out of a greenside bunker and onto the putting surface, often close enough for a tap-in. But to do so, the lie must be perfect. If the ball is even slightly buried, you’re looking at bogey, or worse.

Why the performance disparity? For starters, buried lies are tough, even for a scratch player. Plus, the technique for dislodging a submerged ball is the opposite of the way you approach normal greenside bunker shots. It’s a depth issue. During a standard bunker swing, the clubhead never digs deeper than three-quarters of an inch below the surface of the hazard. It’s this semi-shallow arc (and the fact that you hold the face open through impact) that lets the club slide smoothly under and past the ball. But when the bottom of the ball settles, say, two inches deep into the sand, as it does in a buried lie (photo, left), bottoming out three-quarters of an inch below the surface is not enough. It only sends the ball deeper into the hazard.

The best way to extricate a ball from a buried lie? “Chop” it out. On this shot, your wedge isn’t a wedge—it’s more like an axe. Your goal: Sling the axe down from behind your right shoulder, as though you were chopping wood. Don’t worry about finishing your swing. Just pound down into the hazard so hard that the clubhead literally buries itself into the sand. The harder you chop and the quicker the club comes to a halt in the sand, the shorter and softer the ball will fly—perfect for greenside bunker shots.

It may sound counter-intuitive, but it’s true: Your wedge must penetrate at least two inches deep into the hazard to force the ball up and out. So don’t hold back. Position the ball just forward of center and aim for a spot an inch behind the ball. Then thump it! Avoid holding the clubface open as you do on standard greenside bunker shots. Keep it square when the ball is buried. A square face helps bring your wedge to a screeching halt in the sand, giving you better distance control.

Chopping this way won’t get you much stopping power—there’s too much sand between the ball and your wedge to create much backspin. And you should allow for more roll than usual once the ball hits the green. As with any specialty shot, the more you practice the buried-lie chop shot, the more often you’ll pull it off when it counts. Don’t overdo it, however. It’s more important to get good at standard greenside bunker shots first; they’re vastly more common. Simply try a few chops every time you step into the practice bunker—adding a few “pounds” here and there will quickly cut the fat from your scorecard.