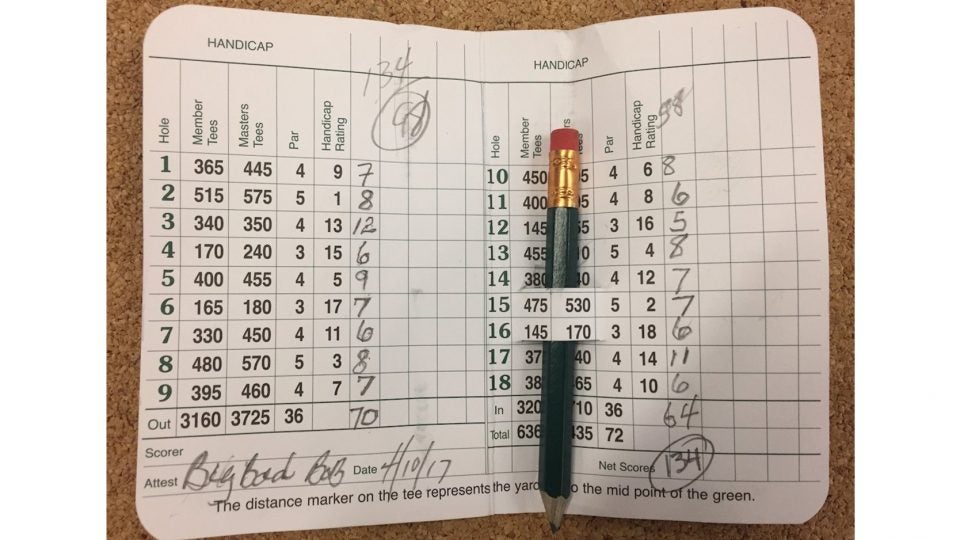 The author's scorecard from the media lottery round at Augusta National Golf Club.

AUGUSTA, Ga. — I shot 134 at Augusta National during the Monday media outing following the 81st Masters.

And I’m damn proud of it.

I counted every shot. I didn’t take any mulligans. I called myself out when my sweet (and incredibly helpful) caddie Bob tried to gift me a shot here and there. I shied away from gimmes. Call me silly, but I wanted the same test of glass-surfaced greens that Sergio Garcia aced just a day earlier.

I’m not a great golfer (obviously), but I’ve learned a lot about my game and have improved in many ways since starting this job a few years ago. But one thing I’ve never quite conquered was the competitiveness within myself to score well, to try to emulate the ridiculously talented players I cover week in and week out.

It sounds crazy, but it took me playing the holy grail of courses (I was one of 28 fortunate lottery winners), to figure out that to enjoy golf, as an amateur, you needn’t post a low number. That old Mark Twain saying about golf being a good walk spoiled? Hogwash.

On Monday, for the first time in at least a dozen rounds, I gave myself a break. Sure, I could have grinded over my final putt — the same putt that Justin Rose faced on 18 for the win — but letting go of trying to nail every shot and the expectation of carding a low round allowed me to loosen up. I snapped photos. I took in every pine, dogwood and what was left of the azalea blooms. I could hear the Sunday roars replaying in my mind walking through Amen Corner.

And I actually played pretty well. Though my score didn’t reflect it, I hit my hybrids solidly, my irons (mostly) on target, and a few drives high and long. The greens, though, gave me hell.

My affable playing partners seemed equally relaxed, trying things they normally wouldn’t during a run-of-the-mill round, like skipping their balls over the water on 16 just as the pros had a few days before. We were patient with one another as we confronted tricky lies, rinsed balls, and deep bunkers. We were enjoying our rounds, in a way, I’m certain, none of us had before.

How did a place like Augusta National, which has been the scene of so much heartbreak for the world’s best players, have completely the opposite effect on us? Because we weren’t trying to be the world’s best players. I counted every one of those 134 strokes, not because I was trying to prove something, but because I wanted to see how I could fare on this iconic course, while truly appreciating the beauty and history of my surrounds. That mindset shift is something I’m going to try and bring with me to the course every time I play.

As for that putt on 18? I missed it, just as Rose had. No matter. I still felt like a champion.