How golf can help us through these strange, scary times

We crave order, we human beings. We’re drawn to golf because our game does orderly so well. The U.S. Open concludes on Father’s Day, the Masters on the second Sunday in April. Your Saturday-morning round starts on the first and ends on 18 and has forever. The intra-round chaos, for them and for us, presents all manner of physical and emotional challenge. But then it ends. Is it any wonder the game settles in us so deeply?

And now, for a spell here, that order is being taken from us. Screw you, COVID-19! The Masters won’t conclude on the second Sunday in April. We don’t know if the U.S. Open will end on Father’s Day. We hope it will, of course. Humans are hardwired for optimism, and golfers especially so. Optimism, tempered by realism.

If the conditions are safe, we’ll go for it. We’ll hit that 6-iron out of the woods despite the tree trunk right in front of us. We’ll board that Metro-North train at Grand Central Station in Midtown Manhattan for Mamaroneck and walk from there to Winged Foot.

The best way to invest in the stock market is to buy shares in good companies, or in baskets of good companies, and hold on to them for as long as you can, ideally forever. That’s not investing advice from a sportswriter. That’s from the first page of Warren Buffett. He’s a proven expert (which doesn’t mean he knows everything because of course he does not). He’s also a golfer and a bridge player, so that tells you something.

This is a good time to listen to experts and weigh what they’re saying. Proven experts. Fred Ridley, the chairman of Augusta National, in announcing the club’s sober decision to postpone the 2020 Masters, cited proven experts. These sentences from his Friday morning statement show the clearest of thinking:

“We will continue to work with the World Health Organization, Centers for Disease Control and Prevention, the Office of the Governor, the Georgia Department of Public Health, the City of Augusta and all other local authorities. We are grateful to all of these entities for their exceptional efforts and guidance.”

It is easy to criticize the PGA Tour for its decision to play the second round of the Players with fans, then plan to continue through the weekend without fans, then deciding to cancel the tournament after one round. The criticism is pointless. Jay Monahan, the Tour commissioner, made the best decision he could with the information he had available.

You can see it. We cling to order, to business-as-usual. My own personal motto in these uncertain days (for whatever it’s worth) is to keep calm and carry on, with caution. Monahan, in addressing not just the Players but the next several tournaments after it, was trying to the same. In the end, in the narrow and largely trivial matter of the Players, Monahan had enough strength-of-character to realize he needed to change his mind not once but twice.

You’re here, at this website, with its green flooring and its half-club wind blowing across your screen, for a break, always and today especially. From Biden-Trump, from COVID-19, from school-closing announcements. Ye olde game might only grow in meaning in this period in which we, as a nation and a world, hunker down and ride out a storm the likes of which we have not seen before.

That there will be no live golf tournaments on TV for at least the next few weeks is, of course, practically meaningless in the grand scheme of things. But for many of us, it will leave a hole. I have three suggestions on how to fill the void: watch more golf, read more golf, play more golf.

As for the watching, YouTube has it all. The 1975 Masters, just for starters. Spoiler alert: Jack Nicklaus wins over Tom Weiskopf and Johnny Miller. Everybody, players and caddies, are talking to their ball way more than they do today.

From there, keep going. Annika at Colonial. Hogan hitting balls into the ocean from George Coleman’s backyard. Bobby Jones riding through a ticker-tape parade. JFK’s golf swing. Get lost. 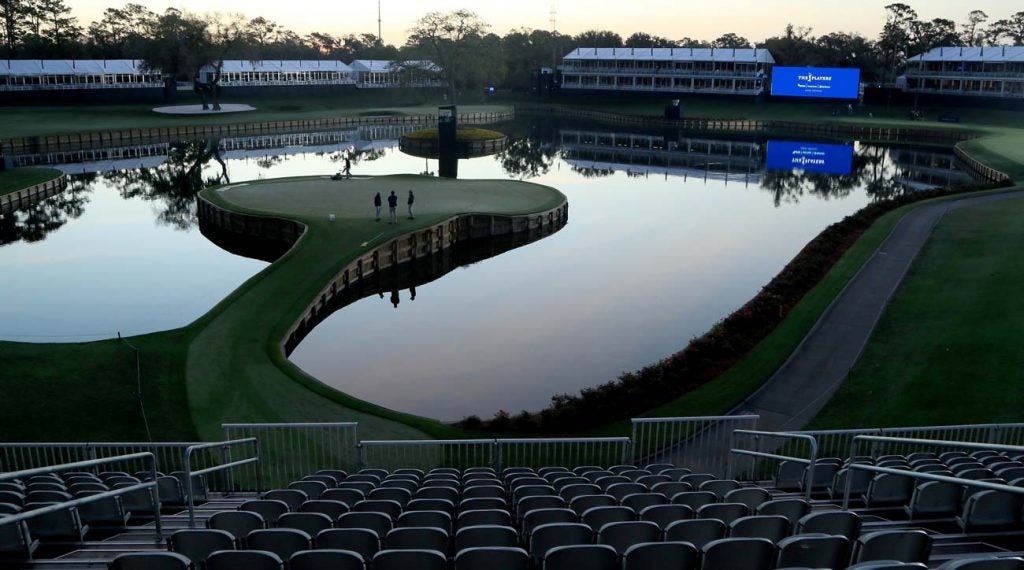 There will be no professional golf played for at least a month.
Getty Images

As for the reading here’s a short, random list representing the three main food groups.

For instruction, Percy Boomer’s On Learning Golf. No instruction book I know captures the feel of a good swing better. You can take it to the course.

For nonfiction, my friend and colleague Alan Shipnuck’s book Bud, Sweat & Tease, about Rich Beem and his caddie, Steve Duplantis. It captures the optimism, tempered by realism, that drives the professional game. You fall into their world. This is a good time to do that.

For fiction, The Franchise Babe, by Dan Jenkins, taking on women’s golf. At times, it’s so bad it’s good. Regardless, it’s a good time, from start to finish.

As for playing more, play more. If you’re a private-club golfer, play a public course. If you’re a public-course golfer, get your dentist to invite you to her club. Hit balls in a field, at a range, at a Topgolf.

Don’t forget to wash your hands.

This too — this COVID thing — shall pass. Things will be different, but we’ll get through it. Golf will help.