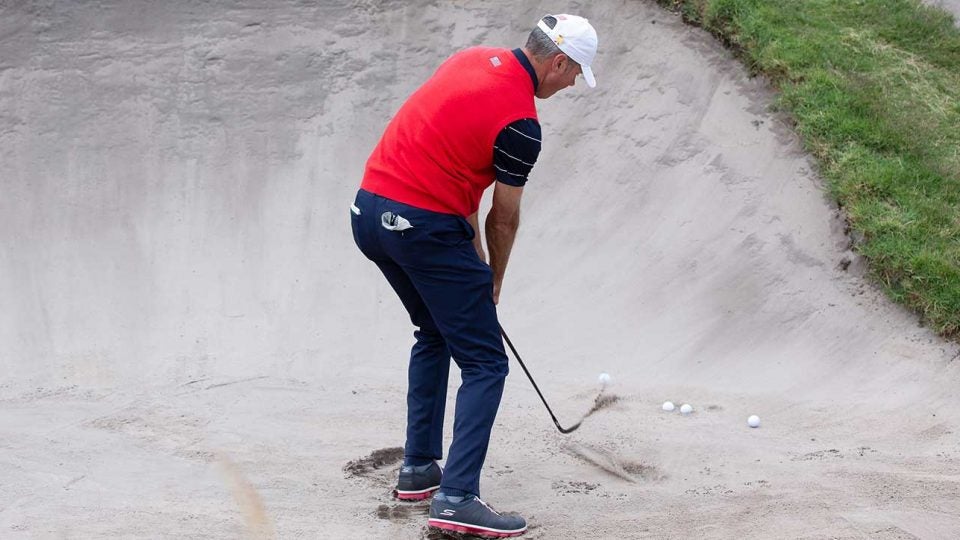 Sometimes, the most dramatic fixes to our golf game are the easiest to make, a lesson learned by none other than Matt Kuchar at this week’s Presidents Cup.

Earlier this week, Kuchar approached NBC lead golf analyst Paul Azinger on the flight to Royal Melbourne in Australia about improving his bunker play. He’d been struggling out of the sand and was seeking counsel in Azinger, the former Ryder Cup captain and owner of two of the greatest sand shots in golf history.

Azinger and Kuchar agreed to link up again during Wednesday’s practice round, leading to an impromptu lesson out of the sand for Kuchar. Just a few minutes later, the pair left the trap with Kuchar’s bunker woes apparently solved.

So, how’d they make such a quick fix?

“I looked at his setup and immediately could tell that he had way too much weight left,” Azinger said. “He had inverted his body where his right shoulder was low.”

Kuchar’s weight imbalance was leading to an obvious problem when addressing the ball.

“A good bunker player will sit there at about 50-50 at address, maybe 60-40 left,” he said. “He was in the sitting position but he had so much weight left that the only way to hit was to back up, and that’s what he was doing.”

All that weight imbalance was having a disproportionately large effect on Kuchar’s game. After ranking 14th on the PGA Tour last season in sand-save percentage, Kuchar’s stats from the sand plummeted to start the 2020 season. To date, he’s tied for 309th on Tour, his save percentage dropping all the way from 60 percent at the end of the 2019 season to 20 percent in the early portion of 2020.

By putting all his weight forward, Azinger noticed a chain reaction of hitches in Kuchar’s bunker swing that were likely causing his consistency issues.

“Mainly it was about the right shoulder dropping down,” Azinger said. “He kept drop-kicking it, he didn’t have any speed at the bottom. And I said, ‘You’ve gotta get that right shoulder up, and you’ve gotta change your weight distribution.’ Very simple. There’s no technique change, just a set-up change.”

Kuchar tweaked his set-up following Azinger’s advice and after only a few minutes, had rediscovered his bunker swing. Despite influencing the lightning quick fix, Azinger took little credit.

“I’ve always believed, if you’re giving a lesson or getting one, when you’re dealing with someone physically smart like that, if they’re not better in the first five minutes, you’re giving them bad information,” he said. “He got better immediately, he was so excited he said, ‘I’m back!'”

Kuchar and his bunker game were held out of the Presidents Cup’s opening round four-ball matches last night. Instead, Kuchar will make his debut with Dustin Johnson in tonight’s foursome matches. Kuchar and Johnson are set to tee off against Louis Oosthuizen and Adam Scott at 7:02 p.m. ET.