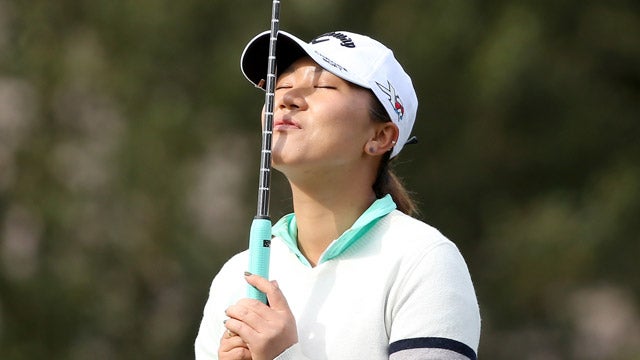 2. Danny Willett. With a 72nd hole birdie in Dubai, the 28-year-old Englishman won his fourth Euro tour title. This guy has the look of the classic Ryder Cup lurker who will break American hearts.

3. Ha Na Jang. One of the LPGA’s biggest extroverts conjured a celebration for the ages after he breakthrough win. Forget the “Battle at Bighorn,” what I really want to see is Jang have a swordfight with Chi Chi Rodriguez.

4. The Crosby Clambake. The best group of pros in ages, an upgraded and more diverse amateur field and a perfect forecast for Pebble Beach has this looking like the best Pro-Am in ages. Bring it on.

5. Rickie. You gotta love how much he cares, and it’s definitely a tough break when a dude who weighs a buck-fifty loses a tournament by driving it 360 yards *over* a green.

1. Rickie. On the other had, what the heck was he doing swinging a driver in that situation?! Over the last year, Rickie has proven he has the physical game to get it done in crunch time, but clear thinking under pressure is one of golf’s biggest challenges. This time, he didn’t pass the test.

2. Yippy pros. In case you haven’t been paying attention, Ian Poulter is now putting one-handed, and Lexi Thompson is wielding her wand with her eyes closed. Oh, and Bernhard Langer is carrying two putters. Otherwise, all is well.

3. Brooke Henderson. The young Canuck has a very bright future, but she missed a big opportunity at the Coates Golf Championship, bogeying two of the final five holes and parring the par-5 18th to finish two strokes behind Jang. No one said it would be easy, kid.

4. Gerry Lester Watson, Jr.. Even by his standards it was a bipolar week in Phoenix. Bubba, please, for your sake and ours, just let your clubs do the talking.

5. Lydia Ko. The world number one started the final round of the Coates tied for the lead but suffered maybe the worst meltdown of her career, with three straight bogeys to close the front nine and then a watery double bogey on the 11th hole. She did, however, keep her eyes open throughout.