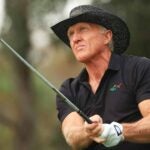 Greg Norman hits a shot during the 2020 PNC Championship.

Greg Norman’s request for a special exemption to play in July’s Open Championship at the Old Course at St. Andrews has been denied, according to a report from Australian Golf Digest.

The Open Championship allows exemptions for champions aged 60 or under, or for those who have won in the previous 10 years. Norman, at 67, did not go through qualifying and was denied his request.

Norman was in the news earlier this spring when he said “I think I can still get in” and added he was in the process of filling out his entry form. That led to the R&A releasing a statement, although not mentioning Norman by name, saying: “The entry terms and conditions for The Open stipulate that a champion must be aged 60 or under or have won the championship in the previous 10 years to be exempt from qualifying. That remains the case for The 150th Open, and we have no plans for any additional exemptions.”

“We have replied to him,” the spokesperson said. “There is no change to our position.”

Reached by Australian Golf Digest, Norman said: “I’m disappointed with their decision, particularly given it is the 150th Open. I have been a staunch proponent of the R&A since 1977 and a proud Champion Golfer of the Year – twice.”

Norman, who will likely still stay busy this summer as the LIV Golf Invitational Series kicks off, last played the Open at Turnberry in 2009.