Greenbrier Resort: 11 Reasons Why the Greenbrier is Coolest Old-Timey Resort in America 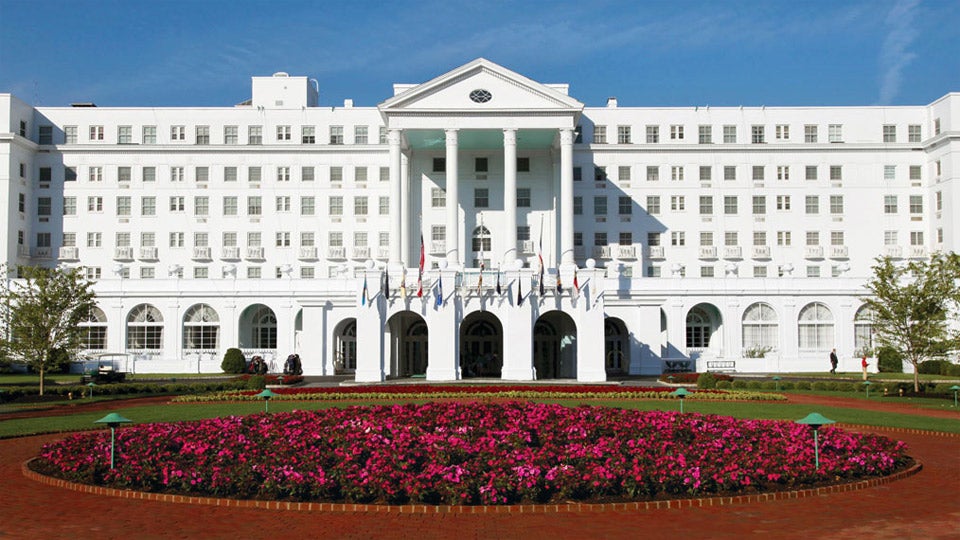 The front entrance at the Greenbrier.

The PGA Tour returns this week to the historic Greenbrier in West Virginia, home to a venerable layout, The Old White TPC. Yeah, we know: Old White. But spare us the jokes about stodgy geriatrics and check out what makes this property so old-timey cool.

The Greenbrier’s roots reach back to 1778, when the first guests arrived to bask in the healing waters of its natural mineral springs. In the 200-plus years since, the resort’s registration books have read like a who’s-who of American politics and popular culture, with guests ranging from Dolley Madison and Davy Crockett, to Debbie Reynolds and George W. Bush.

Opened for play in 1914 (President Woodrow Wilson was among the first to peg it here), The Old White remains one of the rare public-access courses designed by the pioneering American course designer, C.B. Macdonald. Among its classic features: the par-3 Biarritz 3rd hole, its green split by a depression called “The Valley of Sin.”

3. THE SPIRIT OF SLAMMIN’ SAMMY The spirit of Sam Snead is omnipresent here, and no wonder. Slammin’ Sammy first set foot on property in 1936 and showed little inclination to leave. He spent 60 years of his life here, serving as the Greenbrier’s first head pro and later as its head pro emeritus. When Sammy spoke, students listened. Like the time, in 1956, when Snead instructed our golf-mad 34th president, Dwight D. Eisenhower, to stick his butt out to solidify his swing.

4. NEARLY 60 PERCENT OF THE U.S. PRESIDENTS HAVE BUNKED THERE

Ike. Dubya. Woodrow. While we’re talking commanders in chief, it’s worth noting: 26 of 45 U.S. presidents have overnighted at the Greenbrier. (Our presiding First Golfer has not yet visited. Barry, what are you waiting for?)

Dorothy Draper was not Don Draper’s wife. But she was a tastemaker in her time. A famed interior designer noted for her opulent aesthetic, she handled a mid-40s renovation of The Greenbrier, bedecking the resort in rich Technicolor stylings that live on today.

The most memorable bunker at the Greenbrier isn’t made of sand. Carved into the mountainside beneath the resort’s West Virginia Wing, the hideout was built in the 1960s as an emergency fallout shelter, a safe haven large enough to house every member of Congress in the event of nuclear war. Once kept secret, it is now open to daily 90-minute tours, available to the general public as well as hotel guests.

7. THERE’S A PLACE TO WIN BACK ALL YOUR GOLF LOSSES

Given the genteel history of the Greenbrier, a casino sounds incongruous. But this one, which opened in 2010, is a tasteful redoubt, where the dress code calls for dinner jackets and a champagne toast is offered every evening. Think James Bond in Monte Carlo, not your Uncle Vinnie on the Vegas Strip. Who’s that chatty fellow, hobnobbing with guests? Why, it’s Lee Trevino, the six-time major winner who now serves as the Greenbrier’s golf pro emeritus, filling a role that’s been held by just two others: Snead and Tom Watson. Never shy before an audience, Trevino is a fixture on the grounds these days. He’s also available for private lessons and daylong group clinics.

If The Old White layout isn’t throwback enough for you, try another of the Greenbrier’s five courses. Oakhurst Links, which sits a few miles north of the resort, was built in 1884 and is listed on the National Register of Historic Places. It even plays like a time capsule. In lieu of modern equipment, players make their rounds with hickory-shafted sticks and gutta-percha balls, propping their tee balls on little mounds fashioned from sand and water, just as golfers did more than a century ago.

You know you’re at an historic property when the younger of its championship courses dates back to 1924. Originally built by the Golden Age great Seth Raynor, the Greenbrier Course was redesigned by Jack Nicklaus in 1977 and its record since is hardly shabby. It is only course in the world that has staged both a Ryder Cup (1979) and Solheim Cup (1994).

It’s nuts. See for yourself.