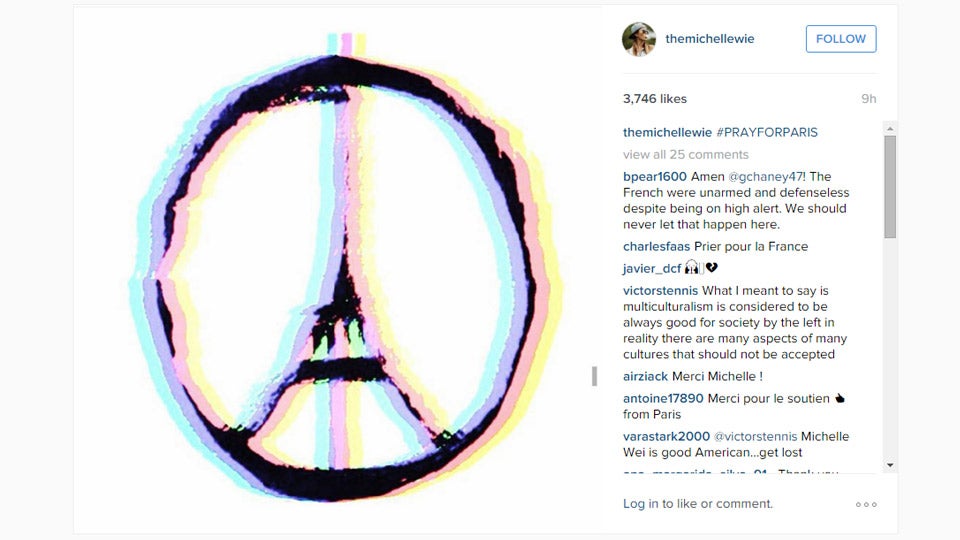 Figures from across the golf world took to social media to express their grief and support for the victims of the terrorist attacks in Paris that took the lives of at least 129 people on Friday, while leaving hundreds of others injured.

At the European Tour’s BMW Masters in Shanghai, players wore black ribbons on their caps to show their solidarity with the people of France and all those affected by this tragedy.

Golfer Benjamin Hebert of France is in the field at the BMW Masters. According to the Associated Press, “Hebert, who shot a 71 on Saturday, posted a picture of himself wearing a white hat and glove with the words “Pray for Paris” written across them, as well as black pants and a green shirt. His tweet read, ‘Black for mourning, green for hope, white for peace.'”

You can read the response by professional golfers and major figures in game below.

Great tragedies in our world today happen far too often. Let’s all come together to stop this terrible violence once & for all #PrayforParis Sad scenes in Paris right now, thoughts going out to all involved. If you need shelter use hashtag #porteouverte #ParisShooting

Players showed their support for the #Paris victims today at the BMW Masters. #PrayForParis pic.twitter.com/7IRRWkwsXa

Those are awful news from Paris. Let’s all send them LOVE and STRENGTH and PEACE. It starts with each of us.  pic.twitter.com/5M8vMUMvVc

Shocking and so sad! Thoughts are with you #ParisAttacks we need to fight back to stop these #terroistattack

Praying for Paris and all those effected by these hateful acts of violence. #PrayersForParis #hateisa4letterword

Sad sad attacks in Paris. Thoughts go out to the families and people who have lost lives.

So sad to hear the news in Paris. My thoughts and prayers go out to all those affected. Totally senseless. #TodosSomosParis