Update — American Airlines said that Michael Buttacavoli’s golf clubs arrived on time with his flight, but were not picked up at baggage claim in Miami. The airline issued this statement to Fox News: “We have looked into the claims by Mr. Buttacavoli. His red-eye flight arrived on-time at 4:41 a.m. ET, Monday, June 5. Our scan data shows that both of his checked bags were on his flight. Both bags came off within the CBP area, since this was an international arrival. The golf bags were not claimed by the passenger.”

Buttacavoli eventually tweeted that his bags had been delivered to him the evening of June 5, and thanked the airline for their help, despite missing out on the qualifier.

By the time I gave up on these it was too late to rent a set & make my tee time. Thanks @AmericanAir for finding them. Time to win in the DR pic.twitter.com/JKSbcS2U8R

Michael Buttacavoli was forced to withdraw from a U.S. Open sectional qualifier after his golf clubs failed to make it to their intended destination Monday.

Buttacavoli, who plays on the PGA Tour Latinoamerica, flew American Airlines overnight from Ecuador to Miami to play his qualifier at Jupiter Hills Club in Tequesta, Fla., Monday morning. Despite the quick turnaround from his event in Ecuador, Buttacavoli made it for his 7:26 a.m. tee time. His clubs, however, did not. 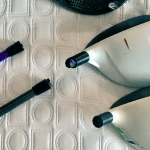 Buttacavoli exchanged some exasperated tweets with the airline, but to no avail. If missing out on a shot at Erin Hills wasn’t bad enough, Buttacavoli has another tournament this week in the Dominican Republic and will need his sticks for that, too.

Thank u @AmericanAir. 1 golf bag w/ priority tags on plane & the only bag u can’t find. Unfortunately have to WD from @usopengolf sectionals

The 29-year-old has qualified for sectionals three other times, but has never made it past that stage. According to Golf Digest, Buttacavoli didn’t try with a set of rentals, and in hindsight, could have asked his brother to borrow his set, as he was coming along to caddie.

“It’s a challenge enough to qualify with your own golf clubs,” Buttacavoli said. “I have a lot of confidence in my abilities, but that’s not giving enough credit to the rest of the guys in the field.”