As the New Year began, change rode in on the Hawaiian trade winds as Golf Channel introduced mid-round interviews with players at the Sentry Tournament of Champions at Kapalua. It was a watershed moment for a PGA Tour broadcast, and it got us musing over other ways to bring us closer to the action. Here are six more changes we’d love to see.

“Every shot covered.” That’s the PGA Tour’s internal mantra. But it isn’t yet the case. We’re waiting for the day when every broadcast will let you watch any player in real time, at any point in any round, from their opening tee shot to their last putt on 18.

We got our first taste of it last year, when the PGA Tour brought augmented reality to the 2018 Arnold Palmer Invitational by way of a whiz-bang app. The technology was cool, letting users project players’ shot trails on select holes onto any flat surface. But it was just a start. The end game here is a full-blown rollout of virtual reality, which would allow a viewer at home to don a headset and find himself immersed in the event. That’s something we’d like to see.

Both a Broadcast and a Sportsbook? Bet on It

Picture this: As Rory McIlroy is lining up a putt, the odds of him making it flash on your screen, along with an option to place a wager. From state to state, the rules and regulations aren’t yet settled, but the Supreme Court has cleared a path for legalized gambling, and the PGA Tour has gotten behind it. When it comes to this kind of feature in a broadcast, there’s not much technology standing in its way.

Better Reads Around the Greens

Golf broadcasts today do a pretty darned good job of tracing the flight of drives and iron shots. Less so the roll of balls along the green. Sure, that kind of coverage can be costly, which explains why we don’t see it on every putt. But in 2008, when Golf Channel won an Emmy for its putt-tracing AimPoint technology, it served as a reminder: the subtleties of the short-game can make compelling theater. All we’ve got to say is: more of that, please. 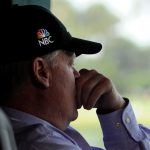 You may also like So long, Johnny: Behind the scenes of Johnny Miller’s final NBC broadcast

Miking Up and More

Just because The Match between Tiger Woods and Phil Mickelson gave us brutally dull banter doesn’t mean that miking up players is a bad idea. It’s already happening on the Web.com Tour, but it should happen with greater frequency. Every Tour broadcast should let fans listen in on select pairings (so long as they’re more interesting than Phil-Tiger). And while we’re busy butting in, why not gather additional info, like unobtrusive sensors to measure a player’s pulse rate during pressure-packed moments? We can get their cholesterol some other day.

For all the hiccups in FoxSports’ coverage of the U.S. Open, the network deserves kudos for bringing golf course architect Gil Hanse into the booth. His observations on design and its influence on strategy and shot-selection lend a depth and dimension that’s been largely lacking in traditional golf broadcasts. More voices like his would help illuminate an aspect of the game that involves much more than whether a hole bends left or right.