This golf gambling game will torture your least consistent buddy 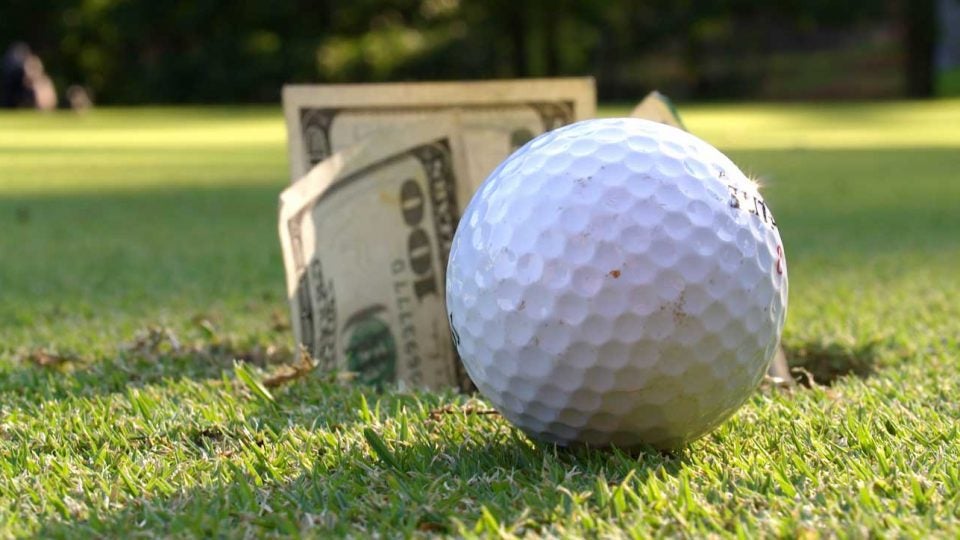 Some of golf’s betting games are designed to make sure everyone is having a good time, regardless of their score. Most best ball formats, for example, cut a player who’s having a blow-up hole a little extra slack. Not so much when you’re playing a Daytona.

I first dabbled in a little Daytona in the tiny town of Blue Hill, Maine, where some older locals taught my brother and I the proper value of a shekel. But the Daytona isn’t a game for everyone. Is it for you? Read on and decide.

The Daytona (which is also called the Las Vegas, I’ve heard — all these games have slight distinctions and variations) is a two-on-two betting game on the course. But you keep score a little bit differently than usual two-man games. If, for example, John and Jenny are teammates, and John makes a 4 and Jenny makes a 5, their team score for that hole is a 45.

The smaller score goes first, with two exceptions (we’ll get to those). The way you keep score is by taking the difference between the two team’s scores on a given hole. So if John and Jenny’s opponents, Kim and Kyle, make a 6 and a 7 (for a 67 team score), John and Jenny win 22 points on the hole (67-45=22).

Two quick exceptions complicate scoring slightly, but both are simple and highly relevant.

The first involves double-digit scores. If John makes an 11 and Jenny makes a 4, the higher score actually will go first, which limits the damage to a team score of 114 instead of 411. Regardless, I’d recommend avoiding double digits. That’s when things really get ugly.

The other exception comes into play if one player makes a birdie. This brings into play the rule of “Flipping the Bird,” in which the team with the birdie can flip around the other team’s score.

For example, say the teams are playing a par 3 and Kyle makes a birdie 2, while his partner Kim makes a 4. Their opponents John and Jenny, meanwhile, make a 3 and a 5. Normally their team scores would be 24 and 35, for a difference of 11. But because of Kyle’s birdie, they can flip their opponent’s score to a 53. Suddenly that birdie has turned their winnings on the hole to 29 points. Daytona, baby!

I’m not sure if the game is called Daytona because the scores look like racer numbers or because the points can start slinging around so fast. Where I first dabbled in Daytona, we’d play for a quarter per point. On its own, that will usually keep winnings and losings within a reasonable range.

But if you’re feeling frisky, there are some options available. Anytime a team wants to, they can double the value of each point — although the other team has to immediately decide whether or not to accept that double. Once you get to points that are worth $1 or even more, the inevitable swings of the game can start to pack a serious punch.

But hey, Daytona ain’t for everyone. Stay away if you regularly have blow-up holes, or if you don’t like doing any math on the course, or if you’d rather pick up than grind out a 7 or 8. There’s not much “casual” about the game. And it’s been known to test friendships — things get tense when a three-footer for triple bogey is suddenly worth a whole bunch of cash.

To summarize, Daytona is a fantastic game if everybody’s on the same page. Otherwise it can turn to complete hell. Which side of that fine line the game lands on is up to you and your group!