CHARLOTTE – Making history is rarely easy, but fresh off one of the most stunning victories of his career, Jordan Spieth enters this 99th PGA Championship with a remarkable record staring him straight in the eyes: a chance to become the sixth player to complete the career grand slam and, at 24, to become the youngest player to join the club.

It’s the most tantalizing story of the week, the kind of thing that would cause the blood pressure of many players to spike. Spieth doesn’t see it that way. 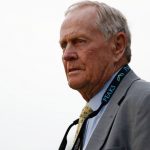 “There will certainly be pressure. I’m simply stating, there won’t be added expectations or pressure,” Spieth said at his press conference Wednesday morning. “How? I don’t know. It’s not a burning desire to have to be the youngest to do something, and that would be the only reason there would be added expectations. If I don’t win one in the next 10 years, then maybe there’s added pressure then.

“Hopefully we don’t have to have this conversation in 10 years.” History is waiting, but for now we’ll take Spieth’s cue and focus on the challenge ahead here at Quail Hollow. For Spieth to win and enter his name in the pantheon of career grand slam winners, (the complete list: Sarazen, Hogan, Player, Nicklaus, Woods) he’ll need to tame a venerable course that has been stretched out specifically for this event. Soggy conditions, with more rain on the way, further tip the scale in favor of players who hit the ball the farthest, and Spieth currently ranks a middle-of-the-pack 80th on Tour in driving distance. He knows this will be a tough track for him.

“I’m hitting it 290 instead of getting the roll-out to 310. I’m hitting two extra clubs into greens but the greens aren’t like the fairways – the greens are firm,” Spieth said. “You have to have unbelievable distance control out here once you’re in the fairway to get the ball close to these pins.”

You may also like Spieth, McIlroy are betting favorites to win PGA Championship

Fortunately for Spieth, iron shots are the strength of his game this season – in fact, stats say he’s the best in the world: he leads the Tour in Strokes Gained approaching the green. He also ranks tied for third in “bounce back,” which measures how often a player makes a birdie immediately after a bogey. (Spieth has turned that trick on more than 27% of his opportunities this season.)

No bounce back was more impressive, or more critical, than Spieth’s birdie on the 14th hole Sunday at Birkdale, when he staked his tee shot on the par-3 immediately after his bizarre 30-minute adventure that will live forever in Open history.

Since his win, Spieth let loose. He drank from the jug. He heard from both Jack Nicklaus and former President George W. Bush. And last week in his first event since The Open, he still looked sharp while finishing 13th at Firestone. There’s no sign of a burnout. In addition to The Open, this season Spieth has also won the Travelers and the Pebble Beach Pro-Am, which means that with a big finish, Spieth’s 2017 season could actually exceed his astonishing record from 2015, when he won two majors among five titles and claimed player of the year honors.

“If I can get the job done this week, and then run into the playoffs with the same kind of momentum, then I would consider it as good or a better year than even [2015], which is pretty cool,” Spieth said. “But I understand it’s not as easy as I just said it.” 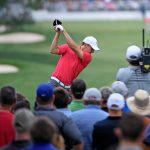 Still, the lure of history this week is impossible to ignore. Of the five slam winners, Hogan, Sarazen and Woods completed their respective fourth legs on their first try. It may be best to not be stuck one major short of the slam for too long – among active players with a shot, Phil Mickelson (U.S. Open) and Rory McIlroy (Masters) have not seriously threatened in those tournaments since they reached the doorstep. The weight adds with each passing year. But for now, Spieth plans to ride the British Open afterglow and see where it takes him.

“It was only two weeks ago that I was able to get the third leg, and that’s so fresh in my mind. I’m so happy about that that I can’t add pressure to this week,” Spieth said. “I’m free-rolling. And it feels good. I’m about as kind of free and relaxed at a major than I think I’ve ever felt.”

Sounds like a solid plan. Let’s see how he feels this weekend.