Longtime CBS golf announcer and seven-time European Tour winner Peter Oosterhuis has revealed that he has early-onset Alzheimer’s disease, according to a Golf World report.

Oosterhuis, 67, retired from the broadcast booth earlier this year, ending a 20-year run that included stints on Golf Channel, CBS and BBC. In addition to his seven European Tour wins, Oosterhuis competed on six Ryder Cup teams and compiled a 14-11-3 record. He also led the European Tour Order of Merit four consecutive seasons from 1971-1974.

According to the Golf World story, Oosterhuis was diagnosed in July of last year near his home in Charlotte. Peter and his wife Roothie initially kept the disease a secret, but Peter told his agent ahead of his contract expiring in November 2014. He also told longtime friend and CBS colleague, Jim Nantz, whose father died of Alzheimer’s in 2008.

Peter and Roothie made the diagnosis public during a fundraising event at Pebble Beach in May, a video of which can be found here. In publicizing his battle with Alzheimer’s, Oosterhuis is joining fundraising forces with Nantz, who started Nantz National Alzheimer’s Center at Houston Methodist Neurological Center in 2011. 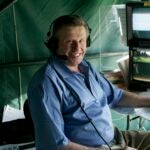 “Maybe in the course of my commentary, I wasn’t giving a lot of information like I used to,” Oosterhuis told Golf World. “I would just talk about what’s on the screen. But I didn’t feel like I had those things ready in my mind to call on to make a point, like I used to.”

Oosterhuis has been receiving specialized treatment since December of last year and is in line for an experimental drug designed to combat the disease.

“I don’t think of it as a bad break,” said Oosterhuis, “at least not yet.”