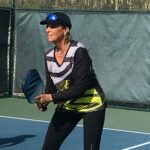 After Sherry Steinhauer’s eight-title LPGA career was derailed by injuries, she transitioned from the course to the (pickleball) court.

In the waning days of her career on the LPGA’s over-45 Legends Tour, two-time major champion Sherri Steinhauer was approached by friend and fellow pro Lisa DePaulo, asking her to try an up-and-coming racquet sport called pickleball.

She’d avoided tennis forever for fear that it would make her right side stronger than her left, “even though I’m pretty sure Jack Nicklaus played tennis throughout his career,” Steinhauer said the other day. (True.) “I told Lisa I’d try it when I was done with golf.”

Fast-forward a few years, to 2016. After eight LPGA victories, including major wins at the 1992 Du Maurier and 2006 Women’s British Open — a championship she won twice prior to its being designated an LPGA major — Steinhauer finally got closed out by her nemesis, persistent hip injuries. A limited backswing turn led to a steady diet of right misses and, with it, the end of her desire to play competitive golf.

But not of her desire to compete. Reenter pickleball, a mashup of tennis, table tennis and badminton, and among the fastest-growing sports in America. Pickleball counts Phil Mickelson, Matt Kuchar, Daniel Summerhays, Ricky Barnes and Hank Haney among its more than 3.4 million devotees and is a staple in golf communities from Florida to Arizona to California.

“I became addicted to it immediately,” said Steinhauer, who is 58. “I’ve barely missed a day since. All I’ve known my whole life is competition, and I’ve just been having so much fun learning a new sport.”

Well, it wasn’t all fun at first.

Steinhauer and DePaulo entered a small local tournament in Palm Springs, Calif., where they were paired against two “older ladies,” as she delicately puts it.

“We were like, ‘This is ridiculous,’” Steinhauer said. “Then they beat us, and we walked off the court going, ‘What just happened?’”

This sour pickleball experience only motivated her. Steinhauer set about studying the game and playing in more tournaments. As luck would have it, one day she called the golf pro at her local club, Nakoma GC in Madison, Wis., to shoot the breeze. When she mentioned her newfound passion for pickleball, the pro informed her that a club member, Dave Weinbach, was a national champion player. Steinhauer rang up Weinbach and started taking lessons. (Suggested mixed-doubles partnership name: Team Brine-Wein-Stein.)

Steinhauer also took lessons in Palm Springs, from another pro, Morgan Evans. Evans is sponsored by Selkirk Sport, and he gave Steinhauer some of its paddles to demo. She liked them immediately and wound up with a dill, er, deal as an official brand ambassador, preaching the benefits of Selkirk’s equipment whenever she competes, which is whenever she can.

Now a resident of Phoenix, Steinhauer plays doubles in the 50-and-over Pro division of top pickleball tournaments. She hasn’t picked up a golf club in five years — “Gosh, for me it’s hard to play when you’re not even close to the level you once were,” she said — but will tell anyone who listens to give pickleball a try.

“It’s fast-learning — you see the strides you make very quickly, which is fun,” Steinhauer said. “Pickleball is also very, very social. I can go alone to the pickleball court and just pick up games. It’s like golf in that way.”