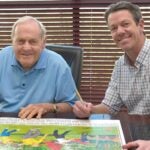 The Jack Nicklaus of golf artists is a 52-year-old man who lives in Flagstaff, Ariz., named Lee Wybranski. Wybranski has provided the artwork for about two dozen USGA posters over the years, depicting courses that many golfers, Nicklaus among them, know well. Shinnecock Hills and Oakmont and Pebble Beach. More recently, working with Nicklaus and in watercolor, Amen Corner called his name.

Wybranski, in a new work (which you can bid on here), has reimagined the iconic par-3 12th hole at Augusta National, populating its green lawn, in between the tee and Rae’s Creek, with six depictions of Nicklaus in action. There’s never been an artwork quite like it. Any student of Nicklaus will recognize the six iconic moments Wybranski captures from the Nicklaus-at-Augusta canon:

Why all this attention to color, you may wonder, especially when you consider that the subject himself is color-blind? Because color is to an artist what a ball’s lie is to a golfer: the necessary starting point.

“It was interesting for me to see Jack wearing yellow for three of those wins,” Wybranski said recently. And then he cited the years. He pointed out the gold Golden Bear emblem in his new painting’s lower-right-hand corner, the three shiny copper pennies in the lower left-hand, Jack’s blond hair through the years, the painting’s gold border. Artists and colors — it’s a thing.

The name of Augusta’s 12th, you may know, is Golden Bell. In Wybranski’s painting, the hole looks so serene. Other artists — a Tom Weiskopf, a Jordan Spieth, a Francesco Molinari — might paint it with fangs. Nicklaus’ rule for playing the hole was safety first: tee shot into the widest part of a famously skinny green, lag putt below the hole, tap it in for par.

BID ON THE PRINT HERE: 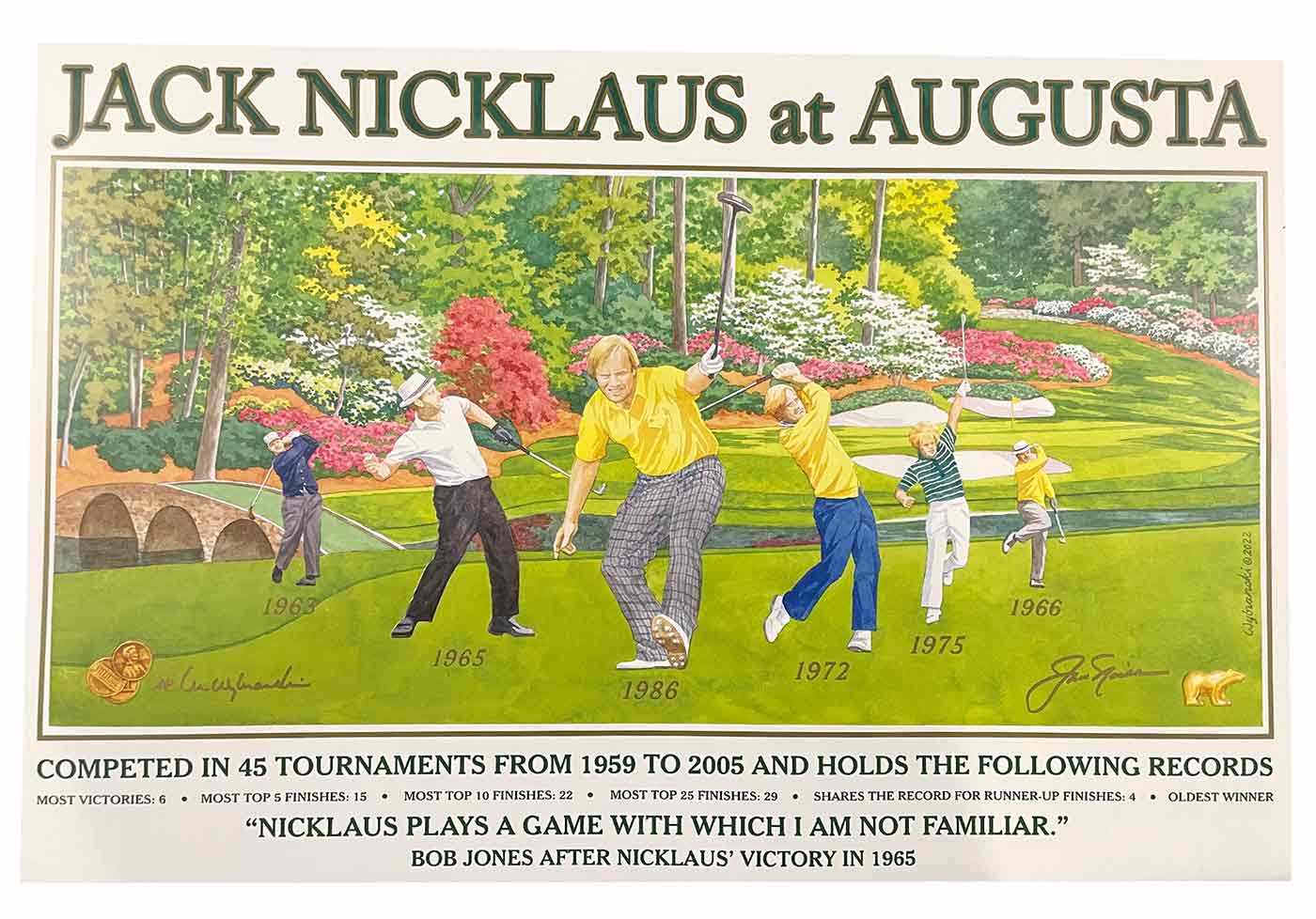 Auction
Only 86 of these lithographs will be available to the public. All are autographed by both Jack Nicklaus and the artist, Lee Wybranski, and celebrate Nicklaus’ historic six Masters victories.
Bid now

Nicklaus’ Masters victory in 1986 was his 18th and last major championship win, and Nicklaus and Wybranski have signed and numbered 86 limited-edition prints of the painting. If you get a chance to examine one of these lithographs in person, you’ll see that Nicklaus’ head is actually raised. It’s three-dimensional. There will be a small run of posters too.

“Portraiture at this scale is difficult,” Wybranski said. In a normal portrait, he noted, “the head is the size of a dinner plate.” In Wybranski’s Jack-at-Augusta painting, Jack’s famous Teutonic head is about the size of a ball marker.

Speaking of ball markers: Before Wybranski put brush to canvas, he talked to Nicklaus via Zoom and learned that Nicklaus always carried three pennies when he played. One to mark his ball, another in case he lost the first one and a third one in case a partner needed a marker.

After they talked, Wybranski started thinking about ways to incorporate Nicklaus’ three-penny custom into his painting. All these months later, there they are, a trio of suspended pennies in the painting’s southwestern corner. Artist and subject as collaborators.

For Wybranski, this is a sui generis artwork. “As a painter of golf courses, I paint a lot of trees,” he said. The artist wasn’t complaining, just citing a fact of his life. This painting has trees, but it’s really about a one-off golfer playing a stunning hole in a tournament that stops time.

Here’s how Nicklaus describes the 12th:

“One of the most talked about and picturesque holes on the golf course. It was the inspiration for the 12th hole at Muirfield Village. It’s a tough hole, no question, and so strategic. Thinking about a birdie there is a mistake. If you make 3, 3, 3 and 4 over four rounds, you can be in a position to win the Masters. You can’t afford a disaster at 12. I think I put the ball in the water one time at 12 — in 1959, as an amateur, playing in my first Masters.”

And here’s how Wybranski sees the 12th:

Three arches. Not two or four.

“While I am not a photorealist painter, I do want to be factually accurate,” Wybranski said. “But the most important thing to me is to capture a mood.” The mood in this painting is beauty-meets-joy.

It captures the Nicklaus wins. Maybe another painting will capture Nicklaus at Augusta in ’64, ’71, ’77 and ’81 — the years he finished second. Wybranski would be an ideal painter for that unlikely piece. “One of the things I love about Jack is how he handled all those close calls,” Wybranski said. “I love watching tapes of the Duel in the Sun,” he said, referring to the 1977 British Open when Tom Watson and Nicklaus battled shot for shot at Turnberry. Watson won and Nicklaus, the runner-up, draped his arm around him. Wybranski can already see the painting in his head.

Nicklaus has been a subject for many contemporary artists, from LeRoy Neiman to Andy Warhol. When Warhol instructed Nicklaus to move the “stick” on his shoulder, Nicklaus said to a friend accompanying him, “Does this guy know what he’s doing?” Well, yes. Warhol did, and Wybranski does.

Nicklaus went the other way, looking at art from a golfer’s perspective.

“I told Lee that, although I am not an artist, we share a similar trait when it comes to what I do in golf course design,” Nicklaus said recently. “I look at a piece of land like a blank canvas, and then I create. And my goal is to create something that people can enjoy for many years.”

After posing for Warhol, Nicklaus expected to receive one of the artist’s finished portraits. It never arrived. That’s not going to happen this time. Eighty-six numbered lithographs are being auctioned, but 106 are being made. Nicklaus will get 10 lithographs, and the artist will get 10 for himself. And that’s it.

Eventually, one of them will likely make it to a wall at the Jack Nicklaus Museum on the Ohio State campus in Columbus, where any of us can check out Big Jack at Augusta, winning those half dozen green coats all over again, for years to come.