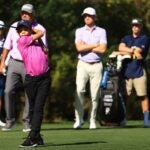 Charlie Woods put on quite a show last year, alongside dad, Tiger.

In case you haven’t heard, Tiger and Charlie Woods are teeing it up for the second year in a row at the PNC Championship. Last year, the announcement of their pairing pretty much broke the internet.

It’s hard to outshine Tiger Woods, but Charlie was more than up to the task in 2020. Below, check out five ways the pre-teen upstaged not only his famous father, but also the rest of the 20-team field.

Charlie Woods was top of mind before the tournament even began. At last year’s Mayakoba Golf Classic, Justin Thomas got the hype machine fired up nice and early when he revealed that he has something of a rivalry with the then 11-year-old.

“For some reason, Charlie just always wants to beat me, it doesn’t matter what it is,” he said. “Although he’s never beaten me in golf or a putting contest, he still talks trash just like his dad,” Thomas joked. “It will be fun. We’ll have that like inner tournament within a tournament, trying to shut his little mouth up, but it will be fun.”

Until his appearance at last year’s PNC Championship, the only glimpses the golf world had received of Charlie’s game were a smattering of creepy bush-cam footage unofficially obtained from junior events. But when Charlie and Tiger teed it up side-by-side on the range for all the world to see, the resemblance was both uncanny and totally adorable — and sent Twitter into a tizzy.

One of the best parts of last year’s PNC Championship was getting a glimpse of the father-son dynamic between Tiger and Charlie. And when Charlie smashed a 5-wood 175 yards to near gimme-distance on the par-5 3rd hole — and then drained the putt for eagle — Tiger was, just like us, elated. Even more impressive — it was the only eagle of the day!

Viewers ate it up when Charlie expertly trolled his playing partner, Justin Thomas, with a note left next to Thomas’ ball, which had found the fairway bunker off the tee. The note said, “Draw hole,” and was reportedly also left for Charlie by Justin’s father, Mike, at a pro-am earlier in the week.

Clearly, Thomas got a kick out of it. I mean, hey, who doesn’t enjoy getting shown up by an 11-year-old on TV?

Not only did Charlie Woods impress viewers with his play and composure, he and dad also killed it with their Sunday wardrobe: Tiger’s traditional red polo, black pants and black hat. To top it off, the duo had an incredible showing. Sure, Tiger was Charlie’s partner, but the 11-year-old was the youngest competitor in the field, and Team Woods ended up seventh, ahead of 13 other teams that included the likes of Annika Sorenstam, Greg Norman, Jim Furyk and Bernhard Langer.

Shop our selection of TW gear As Tiger Woods returns to competition this weekend, our team of experts will break down every angle in a special preview show available only to InsideGOLF members. Coming Friday. Join now for access!