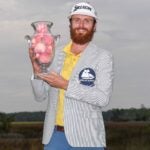 Evan Harmeling sported the same outfit all weekend at the Savannah Golf Championship.

Sergio Garcia’s resurgence was the feel-good story of last week — and for good reason — but there was plenty else happening in golf, too. Here are three stories you might’ve missed.

At long last, Mel Reid is a champion on the LPGA Tour. The six-time Ladies European Tour champion had put together a solid career worldwide but had yet to get it done on American soil. That changed at the ShopRite LPGA Classic.

Reid shot four straight rounds in the 60s, closing with a 67 to claim the title in New Jersey by two strokes. Her final round featured seven birdies, including one on the 18th to best second-place Jennifer Kupcho. The victory is her first since winning in Australia three years ago.

Now Reid’s attention turns to the KPMG Women’s PGA Championship which will be contested this week at Aronimink Golf Club. Reid has never won a major, though she does have three top 10s, including a T3 at last year’s Women’s PGA.

Evan Harmeling won the Savannah Golf Championship on the Korn Ferry Tour last weekend, shooting 21 under to force a playoff that he won over Kevin Dougherty on the first extra hole. Remarkably, the win was the nine-year pro’s first top 10 on the development circuit, and just his third top 25. He also caught attention for his wardrobe choice on the final day.

Harmeling went with a yellow shirt and blue pants on Sunday, a relatively tame pallet compared to what other golfers have sported over the years. Except for the fact that it was the same exact outfit he’d worn the day before.

The scripting was also the same for his win in Jamaica last season on the PGA Tour Latinoamérica. Golfers have been known to be a superstitious bunch, so it’s safe to assume the yellow shirt will stay in the rotation.

Club covers fit for a champion

Who said club covers don’t help your game? Aaron Rai claimed his second European Tour title at the Scottish Open on Sunday, and he sported covers on his irons throughout the week. Long seen as a sign of an inexperienced hacker, Rai is making clubhead covers cool.

As GOLF’s own Jonathan Wall detailed, this is Rai’s second victory sporting clubhead covers, though these seem to be a newer set. It’s unclear why he uses the covers, but the scarcity of the TW irons he plays might play a role.

“It’s incredible,” Rai said of his win. “It’s a dream come true. If I’m honest, to win any event on The European Tour is amazing. You have to play some world-class golf. But for it to be a Rolex Series with the class of field that was this week is deeply satisfying.”