‘Dude, if I knew, I’d tell you’: Tiger Woods tries to explain how he swings so hard

At Tuesday’s press conference announcing his selection as 2019 Presidents Cup captain, Woods was asked to explain his impressive clubhead speed with the driver after four back surgeries. His answer suggested he’s as curious as the rest of us.

“Dude, if I knew I would tell you,” he said, shrugging his shoulders. “I don’t know! It just — it just happened.”

The question was well-founded: Woods’ average clubhead speed of 122.4 miles per hour ranks second on Tour. During his last full season on Tour, he was 28th with an average of 118.3 mph. On his tee shot at the 14th hole at the Valspar Championship on Saturday, he recorded a PGA Tour season-high swing speed of 129.2 mph. 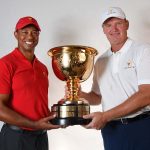 You may also like Team Player: Tiger Woods raising his hand for a Presidents Cup captaincy is yet another sign that he’s evolving

Woods took a stab at a more comprehensive explanation, too, saying he used to swing a shorter, heavier driver that was 43.5 inches and steel-shafted. But he thinks there’s more to it than that.

“I know that these shafts are much lighter than they were then, slightly longer, but still I don’t know, because I went through a number of years where I just couldn’t get speed,” he said. “Now all of a sudden it’s just happening. I think that — we think amongst our, my inner circle is that I was living in so much pain I didn’t know it and I was just going through that slide of just protecting, playing around it and I didn’t know. I thought, Oh, I hit that hard and it’s like slow mo. But to me it felt hard.

“Now I don’t feel like I’m swinging very hard, but it’s producing some incredible speeds, which I’m not against.”