Tiger Woods with son Charlie and daughter Sam at the Masters in April.
Sports Illustrated/Fred Vuich

Who has the best golf swing in the Woods family? Apparently, not Tiger.

During his press conference yesterday at the Memorial Tournament, Woods talked about the athletic ability of his two kids, Sam and Charlie. According to the 14-time major champion, 6-year-old Charlie has a pretty darn good golf swing.

“He’s got some parts in his swing that I’m trying to do,” said Woods to laughter. “It’s a little frustrating at times.”

Tiger said he’s teaching Charlie the game the same way his father, Earl, taught him: by creating made-up pars based on Charlie’s ability.

“When I played, I was so little. A par-4 is not a par-4. So my dad created my own par. So every time I would play the hole, whatever shots it took me to get to the green, reasonably, plus two. So sometimes it was a par- 12. 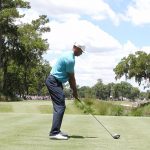 You may also like Tiger Woods New Swing Sequence

“And that’s what I did with Charlie…It’s about them enjoying the attention that it takes to try to get to par…What my dad did was genius because it kept me interested. It kept me focused on, my dad shot 2-over and I shot three, and I almost beat him. Even though I was making 11 and 12 on holes, but in relation that’s about right.”

No word yet on whether Charlie has beaten his father in relation to “par,” but if it hasn’t happened yet it’s probably only a matter of time.