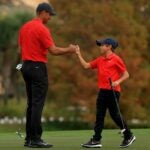 Tiger Woods and his son Charlie bump fists during the 2021 PNC Championship.

Tiger Woods made his first public appearance yesterday since his devastating car crash back in February, fielding questions from eager media members about his injuries, his recovery, and his future in pro golf ahead of this week’s Hero World Challenge.

He revealed he spent three weeks in the hospital, two months in a wheelchair, and there was even talk of amputation. It was a lot for Tiger fans to digest, especially when Woods had gone radio silent for many months.

Tiger repeatedly stated that while he plans to attempt a PGA Tour comeback, even for “a few events a year,” he’s only at about the halfway point of his recovery.

“I’ll put it to you this way, as far as playing at the Tour level, I don’t know when that’s going to happen,” Woods said on Tuesday

That seemed to snuff out hopes we would see him tee it up with his son Charlie in the PNC Championship at the end of this month, as they did last year.

In his very next sentence, Woods defined the type of golf he could play right now: “Now, I’ll play a round here or there, a little hit and giggle,” Tiger said, “I can do something like that.”

Some would refer to this week’s limited-field Hero World Challenge as a “hit and giggle” despite the $3.5 million purse, because it’s an unofficial exhibition with stars enjoying the sand and sun of The Bahamas as much as the golf course.

But it’s still 72 holes of tournament golf, and though there are only 20 competitors, they are the best in the game. So Tiger won’t be teeing it up on Thursday, instead accomplishing his tournament hosting duties from the comfort of a golf cart.

The PNC Championship is a different animal. Formerly known as the Father-Son Challenge, it pits two-player teams of family members — usually father-son, father-daughter, etc. — across just 36 holes in a scramble format. The pressure is low, and the focus is on family and fun.

All of those peculiarities of the event make it much more suitable for the current state of Tiger’s body and game. Most of all, though, Tiger seemed to genuinely love the experience of playing alongside Charlie at last year’s PNC. The 15-time major champ was beaming all weekend as he shared laughs and trash talk with Charlie and their playing partners, Justin Thomas and his dad Mike.

“I don’t think words can describe it,” Woods said after the event. “Just the fact that we were able to have this experience together, Charlie and I, they are memories for a lifetime.”

So there’s little doubt that Tiger wants to play, but the question as to whether his body can handle it is still unanswered.

The PNC Championship kicks off Saturday, December 18, at the Grand Lakes Orlando Course at the Ritz-Carlton Golf Club in Florida.