Davis Love on Tiger Woods: What He Has to Prove and How Much He Can Win 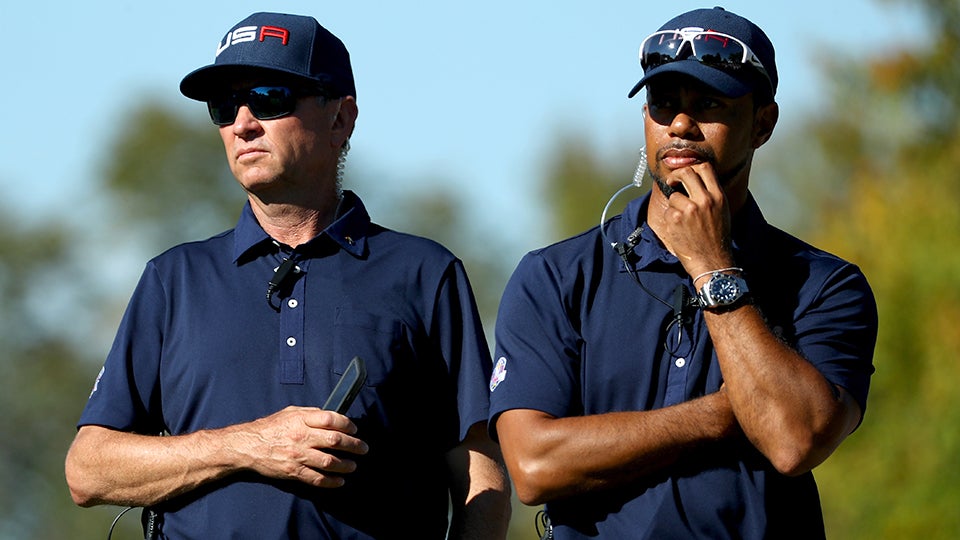 In my experience, there is a short list of people who have had genuine insight into Tiger Woods and his golf. In no particular order my top 10 is: Butch Harmon and his brother Billy; writer Jaime Diaz; Arnold Palmer; caddies Steve Williams and Mike (Fluff) Cowan; Hank Haney; Curtis Strange; Mike Donald; and Earl Woods. Hold it. I have to make room for one more. Davis Love III has to be on the list. In 1996, when Woods was turning pro and DL3 was one of the best players in the world, Davis told me, “He’s already better than I am.”

“How could you know that?” I asked, aware that Tiger hadn’t shown that much in the few PGA Tour events and majors he had played in.

Davis shrugged and said, “He just is.”

I have known Davis to be prescient about other golfers over the years. I called him other day, as he was rehabbing from a broken collarbone that will keep him from playing tournament golf again until March, and he spent close to an hour giving an incredibly useful and insight scouting report about what to expect from Woods in 2017. Here are some of the highlights of that conversation. Davis began it with a statement that only a fellow player could make.

DL3: Tiger knows his place in the game is secure. But still he has something to prove.

DL3: To himself. To people who say he is done. He has too much energy and too much pride to go out this way. He doesn’t want the limelight. What he wants is to beat us. He’s relentless in everything he does.

I remember playing with him at Callaway Gardens in ’96. He said, “Someday I want to beat you down the stretch.” That’s still him. That’s straight from Earl, from his military experience. We saw that in the team room at the Ryder Cup. [Love was the U.S. captain and Woods was one of his assistants for the event at Hazeltine.] He’d say, “We want to dominate them. We want to conquer them.” And that’s how he played. Other guys weren’t like that. That’s what made you scared of him.

MB: How about his kids? Do you think he cares about them seeing him play winning golf again?

DL3: There’s probably some of that. He’d like them to see him playing and preparing like he’s capable of. That would be the fun part of it for him, to have them there when he wins. MB: What did you see in his golf at the December event in the Bahamas?

DL3: His preparation probably got slowed down by the Ryder Cup and all the time he put into it. But what he did showed me a lot. He made the most birdies of anybody in the field. Making birdies, you can’t teach that. That’s God-given ability. Dru [Davis’s son, a senior at Alabama] makes a lot of birdies. He makes a lot of bogeys too, but the reason he has potential is because he makes a lot of birdies. Tiger made [24] birdies. In 72 holes? That shows there’s a lot of life in his game.

MB: How does that translate into your scouting report for Tiger in the new year?

DL3: My theory is that if you give him a full season, and by that I mean 20 tournaments, he will knock all the rust off and play some good golf again.

MB: What’s good golf for him these days?

DL3: Well, can he break Jack’s record? Who knows? But he can win again. If I can win on Tour at 51, having been through all the injuries and surgeries I’ve had, he can absolutely win again. He’s a heck of a lot stronger and better at 41 than I was at 51.

MB: If he can play 20 a year for each of the next five years, how often can he win?

DL3: At least one in 20. I know that’s nothing compared to the three in 20 he is used to winning. But I can see one in 20, a win in each of the next five years. I’m not saying the sky is the limit for him. This is a different Tiger Woods. But he can win.

MB: What about chipping off tight lies? What about making short putts down the stretch?

DL3: At his best, he was the best in the world in those things. As he’s coming back, they’re going to be hard. He likes to talk about getting his reps in. But the reps he needs have to be in tournaments. If he plays a week and takes off three, those shots become hard. But if you play three straight weeks, if he can, those shots will come back to him. Just like hitting a five-iron out of the rough, over a lake and onto a green. Nothing on the driving range is going to simulate that for you. But you get in a tournament and face that shot it’s like, Oh, yeah, I know how to do this. And if you don’t pull it off the first time, you adjust and pull it off the next time. Same with the putting and chipping.

These past few years, it’s the injuries that stopped Tiger from playing. He’s seen me play some good golf after going through injuries. He’s seen Vijay [Singh] play good golf for a long, long time. Ernie [Els] too. Fred [Couples]. He knows what is possible. I think he knows he has a chance to have a few more great years.

MB: How does his swing look to you?

DL3: From what I saw in the Bahamas, much better. Looks like he is standing up to it more, not going down to the ball on the downswing. Better rhythm. He looked under control. It’s a different swing than what he’s had the last few years, but that was a swing where he was probably protecting injuries. Now it looks like he has control of the club and the ball again.

TOUR CONFIDENTIAL: What to Make of Tiger’s Hectic Return?

DL3: It’s heading that direction. That’s the gold standard. I look at that swing when I watch video. I was looking recently at some swings Tiger made in late 1999, the backswing. He was doing then what I want to be doing.

MB: Where do you think his best chances to win would come?

DL3: I’ve talked to him some about that. Nobody would have said that Hilton Head would be the best course for me. [Love was a noted power player, and putting was not his greatest strength. Yet he has won five times at Hilton Head, a short course with small greens.] But I think Tiger would do great at Hilton Head. He’d hit a lot of irons off tees, and he’d play shots into the greens. That’s what he does. He plays shots. You saw that in the Bahamas. If I were his caddie, I’d try to talk him into playing Hilton Head, Colonial, Palm Springs, at tournaments where you don’t have to hit a lot of drivers, courses where great iron players like he is can make a lot of birdies.

MB: How about Honolulu [where this week’s Sony Open is being played]?

MB: How would you rank his prospects in the majors?

DL3: His best chance is going to be the Masters, because he knows the course so well, because of everything he’s done there. Then the Open, the British Open, because he can hit it low through the wind. The PGA and the U.S. Open especially would be the hardest of the majors for him to win because the rough is so punishing. Not a lot of fun. But the Masters is right in his comfort zone. He’s not going to eat up the par-5s like he used to, but that doesn’t mean he can’t find another way to win.

MB: Talking to players and caddies and wives at the Ryder Cup, I got that they were seeing a different Tiger that week. Do you feel that?

DL3: He’s more approachable than he has ever been. He’s more willing to share. But it’s still the same Tiger. He’s still got the needle out. He’s still cocky. But now it’s like, Let me tell you how many times I won there, and how I did it. And it’s great. He was crucial to our team’s success at Hazeltine. He’s become a true friend. He’s a leader in American team golf.

MB: Including the Presidents Cup? [In 2017, Steve Stricker will be the U.S. Presidents Cup captain, and Woods is one of his assistants.]

DL3: Absolutely. He’ll play a role like Jay [Haas] did for Fred [Couples] or like what Jeff Sluman did for Jack Nicklaus. He’ll be right there.

MB: How else is he different?

DL3: He’s more trusting. When he was preparing to come back, he sent me video of his swing. Can you imagine how many people would have wanted to see that? Tiger Woods, in his backyard, in gym shorts, making swings.

MB: Did he want your insights into what he was doing?

MB: So why was he sending it to you?

DL3: He was showing off!