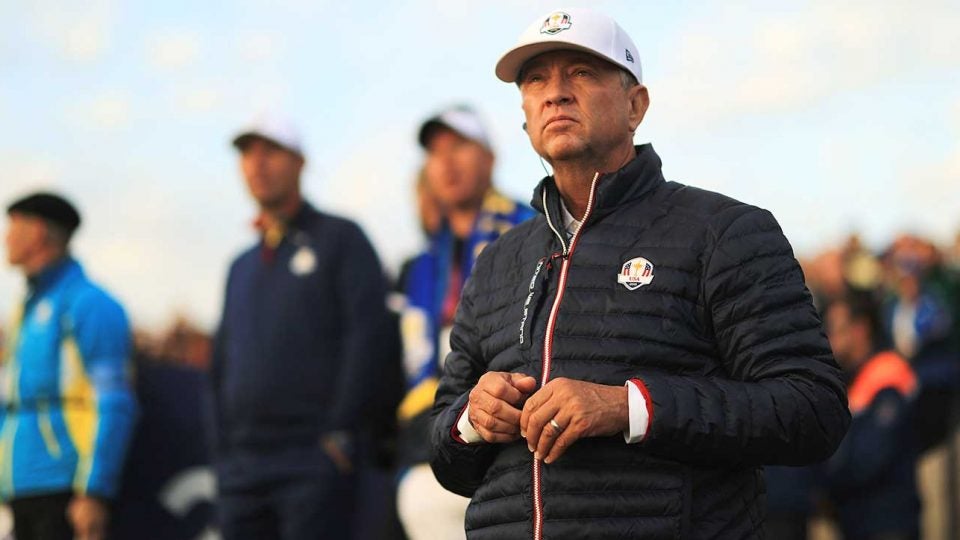 Davis Love III looks on during the 2018 Ryder Cup in Paris.
Getty Images

Davis Love III will transition from part-time player to full-time analyst beginning in 2020.

CBS Sports announced on Tuesday that it has hired Love to be a full-time analyst to cover the PGA Tour, Masters and PGA Championship. Love will make his debut at the network’s first event of the 2020 season, the Farmers Insurance Open at Torrey Pines.

“Davis is one of the most accomplished and respected players in the game of golf,” said Sean McManus, the chairman of CBS Sports, in a release. “With his playing experience, reputation and relationships across the golf community, he brings a unique perspective and insight that will enhance our broadcasts. Davis is the perfect fit for CBS, and we look forward to him making the best broadcast team in golf even better.”

The announcement of Love joining CBS Sports comes just days after it became public that long-time on-course reporters Peter Kostis and Gary McCord were not having their contracts renewed for 2020. In an interview on the Gravy and Sleeze show on SiriusXM PGA Tour radio on Monday, McCord said McManus told him that CBS’s golf coverage had grown “stale.”

“Stale did not work for me,” McCord said in the interview. “That kind of got me riled up a bit. … I didn’t like that at all.”

Love, 55, is a 21-time winner on the PGA Tour and was 1-1 as a Ryder Cup captain. He also played in six Ryder Cups and six Presidents Cups. Love, who has lifetime status on the PGA Tour, played in nine Tour events in 2019 (making five cuts) and made six Champions Tour starts.

“I have long considered CBS Sports the gold standard in golf coverage,” Love said in the release. “Whether playing or coaching, I have always loved the team aspect of golf, and I am thrilled to now be a member of the best team in television. My playing days are not totally over, as I will play select events, but my focus now shifts to broadcasting. I have been fortunate to spend a lot of time with the men and women of CBS Sports, and I look forward to getting started in January.”