Could the Tiger-Phil match sequel be nixed by the PGA Tour? Let’s hope not 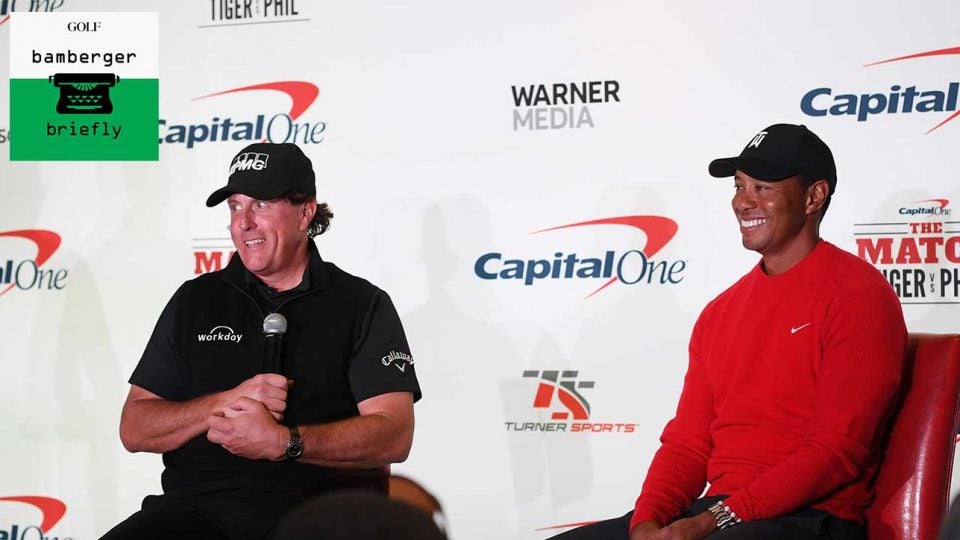 Tiger Woods and Phil Mickelson speak to the media prior to their showdown in 2018.
Getty Images

Ed. note: Every weekday between now and when the PGA Tour resumes play, Michael Bamberger will offer a report in this space by 8 a.m. — usually, but not always, playing off the news. We like to give our guy room to roam, but not here: In Bamberger, Briefly he’ll be contained to 500 words or less. He welcomes your suggestions and comments at Michael_Bamberger@golf.com.

We don’t want to turn this into a soap opera, because this is not a good time for soap operas. Real life is too interesting as it is. But Tiger Woods has told people at Excel Sports, the agency that represents him, that he wants to play in a fundraiser match to help the many people whose lives have been disrupted by the Covid-19 pandemic. And that match may or may not happen.

Woods’s opponent would be Phil Mickelson. The plan is for one golfer to have Tom Brady as his partner and the other to have Peyton Manning, with the event shown on Turner. Four legendary athletes — the golfers, two quarterbacks — playing golf for a good cause. What’s not to like?

The PGA Tour put a damp blanket on the idea on Wednesday, by way of a statement: “Discussions along these lines have been ongoing for quite some time, but nothing has been approved by the Tour.”

The statement is surely accurate but surely limited, too. It’s a complicated business, running the PGA Tour, having broadcast partners (CBS, NBC, ESPN) who want to protect their $700 million investment, having superstars who are members of a guild but who also have colossal egos and millions of fans.

In the grand scheme of things, this proposed fundraiser is of no great consequence. But it could raise money for good causes and improve lives, just as PGA Tour events do every week. It could give starving sports fans something to entertain them for an afternoon. It could be a good thing.

This is an odd moment in a polarized time. And in this odd moment, in this polarized time, we need leaders, at every level and from every direction, who can lift us, unite us and inspire us. In this vacuum, leadership can come from the most unlikely places: from professional athletes, from league officials, from network executives, from doctors and scientists and politicians. Having four famous people play golf isn’t going to make things worse. It’s going to make things better. Modestly better. This is the time for onward and upward.

During World War II, Byron Nelson played more than 100 exhibitions to raise money for war bonds and other patriotic causes. It was a simpler time, of course. But Nelson saw a path by which he could use his skill and his fame for a cause that went way beyond him and way beyond golf. That it was good for him and good for golf was just a happy byproduct. The main point was, do good. Here’s a chance for four athletic icons to do good.