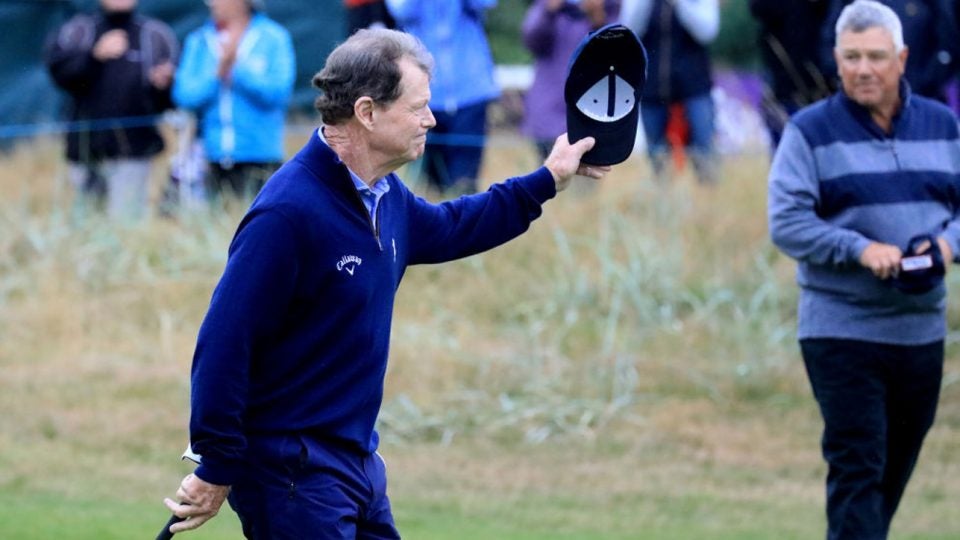 This is a relatively new thing, a golfer announcing his or her retirement before the tank reads empty, with playing options still available. Golf historians debate the starting date of this development, though some point to Matt Gogel’s announcement in 2006, at Pebble Beach, that he was calling it a day, as a significant date. The best comment ever in this broad category — when to keep playing and when to call it a day — came from Ben Hogan, when he said, “I am the sole judge of my standards.” Hogan never had children, but he has one spiritual heir, Tom Watson of Kansas City. And on Sunday, at the British Senior Open at Royal Lytham, Watson will play his final round in an R&A event, his last competitive round on a true links golf course, the type of course that brings to mind the game in its original sense, and at its best.

Watson told the Golf Channel reporter Todd Lewis on Saturday that this would be his final Senior Open. He also said that he won’t be playing in any more Senior U.S. Opens, an event he never won. He won one U.S. Open, in 1982, at the Pebble Beach Golf Links. You wouldn’t call Pebble Beach a links golf course in the British sense, but by American standards it’s pretty darn close. Interestingly, the club the USGA Museum curators covet more than any other is the Wilson wedge with which Watson chipped-in on the 71st hole of that Open, in a shot that could have been played at St. Andrews among dozens of other linksland courses.

Just to keep the theme going for a second, Watson won the Masters twice, long before it had anything like rough, when it was still much closer to the Old Course in spirit. That is, much closer to what Bobby Jones and Alister MacKenzie envisioned the course to be when they were designing it.

This is all a round-about way of saying that this farewell from Watson is significant, because here you have a golfer who played a sort of primal golf in ways nobody else ever did, including everybody.

Watson did not issue a press release announcing his goodbye or anything like that. He just answered a question from Lewis with characteristic candor.

In explaining his decision to call it a day on the two of the most prized senior events, Watson said, “The why is pretty simple, I can’t compete against these guys anymore. I don’t hit the ball far enough, and when you can’t compete, there’s no sense. I’m a realist. I understand how to play the game. And I just don’t have enough tools in the tool box to compete against these guys out here.”

It was the truth, but not the whole truth. At 69, Watson’s primarily focus is on his wife, Hilary, who has been diagnosed with pancreatic cancer. Hearing Watson talk about the subject is like being in a doctor’s office. When Watson speaks of ALS, the disease that claimed the life of his beloved caddie, Bruce Edwards, it is in the same vein. Watson is a horseman, following his wife into the sport of competitive cutting, a Western-saddle equestrian event, sort of like dressage meeting rodeo-riding. Hilary’s world-class. Watson tries.

It was only a decade ago, at 59, that Watson lost a British Open in a playoff to Stewart Cink.

One of Watson’s golfing heroes is Sam Snead, for two main reasons. Snead, like Hogan before him, thought of himself as only one thing: a golfer. Watson follows in that tradition. Also, Snead played high-quality golf right through his late 70s, because he was so limber and strong and because his mechanics were so sound. It has always been a goal of Watson’s to do the same, but not on every stage. With this announcement, he is leaning in the direction of Hogan. He is the judge of his own standards. As Watson says, he is a realist. Golf requires realism and optimism in almost equal measure. In announcing his retreat from Open play, realism was sitting high in the saddle. He tied for 17th last month at the U.S. Senior Open at Notre Dame, won by Steve Stricker. You might say that’s pretty damn good, but you’re not Watson.