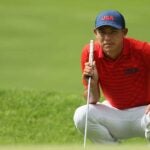 These days, it’s pretty good to be Collin Morikawa.

The 24-year-old appears firmly strapped to a rocket headed for the moon — setting records, dominating tournaments, and yes, even winning major championships with pace and poise we’ve seen from few golfers not named “Woods, Tiger.” The firsts come fast, and they come furiously for Morikawa: the first player to win multiple major championship debuts, the first since Tiger to win the Open and PGA Championship before the age of 25, the youngest since Seve Ballesteros to win the Open while trailing entering the final round.

It’d be easy to forgive the nascent star for losing track of all the firsts that have come his way in the last 12 months. In fact, it’s maybe even expected. But even as Morikawa’s world has changed around him, a singular first has remained squarely within focus: the Ryder Cup.

Morikawa became the first player to have his slot confirmed on the U.S. Ryder Cup team, which is set for late September at Whistling Straits. As one of the U.S. team’s six automatic bids — given to players who finish in the top six of the Ryder Cup points system — Morikawa has a good idea of some of the other stars who will be joining him in Kohler, Wis. In fact, he’s already preparing for a meal with his fellow auto-bids.

“We’re going to have a dinner at the Tour Championship with the six guys that qualify for it,” Morikawa said Wednesday at the Northern Trust. “It will be good, I think, in a person-to-person setting and really lay it out there and see what other players think, see what captains think.”

But for better or worse, auto-bids only make up half of the Ryder Cup roster. Six additional spots are up for grabs, and those spots are entirely at the discretion of the U.S. team’s captain, Steve Stricker.

For his part, Morikawa already has the gears grinding on the type of players he’d like to see occupied by those six captain’s picks.

“I think there are players that just excel,” he said. “Man, I wish I could pinpoint exactly what that is, but some people just have that in them that, when you throw it out there 18 holes or 18 separate matches, mini matches, they’re able to turn something on, and I think you see that in the WGC’s match plays throughout the years. You see guys that are the most consistent players.”

For Morikawa, the captain’s picks shouldn’t be an exercise in picking the best players available, but rather the right ones for the event.

It’s quite possible there are overlaps between the list of “best players available” and “best players for the Ryder Cup team.” Look no further than Jordan Spieth, who currently sits seventh in the Ryder Cup rankings. He’d need a captain’s selection to earn entry into the tournament, but there’s little doubt he’d be an asset to the U.S. side.

Ultimately, Morikawa says, it comes down to something simple: who welcomes the pressure? And who shies away from it?

“I think that’s what the team needs is guys embracing what the Ryder Cup is rather than going out there and just hitting for fun.”