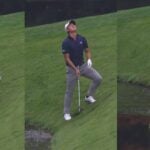 All too literally, Collin Morikawa’s Sunday at the Masters has quickly gone in the wrong direction.

The 23-year-old is far from contention at Augusta National — he began the final round some 15 strokes off the lead — but any hope of ending the week on a high note quickly dissipated Sunday morning.

Thanks to split tee times, Morikawa began his final round on the 10th hole at Augusta shortly after 8:44 a.m. ET Sunday. A few minutes later, he approached the par-4 11th, or as it’s better known, the start of Amen Corner.

After Morikawa piped his drive down the center of the fairway, he pulled a hybrid, which flew over Rae’s Creek and into the rough just shy of the green. For the first time, he could breathe. He’d carried the water and now faced only a chip and a putt for par.

Morikawa’s approach left him with an uncomfortable stance on a sidehill lie. Rather than chip onto the fat part of the green and give himself a long look at par, the young major-winner threw caution to the wind. He set up to hit a flop shot, hoping to stop the ball right next to the flagstick for an easy par.

But Amen Corner does not yield easy pars. Morikawa struck his chip and immediately knew something was wrong. The ball soared straight into the air and came tumbling back down, just as he’d planned. The only problem was, it had traveled no more than a foot in front of him.

Rather than tracking the flagstick, Morikawa watched helplessly as the ball bounced at his feet and into the water behind him.

With his ball in Rae’s Creek, Morikawa trekked back some 70 yards to the drop area. He knocked his chip onto the green, then drained a 10-footer, but the damage was already done. A double-bogey six, and Morikawa dropped from 1-under to 1-over for the tournament.

It’s been that sort of week for Morikawa at the Masters. Despite the sort of ball-striking, fairway-finding prowess that typically finds success at Augusta National, the PGA Championship winner has struggled to find his groove. After an opening round of 2-under 70, Morikawa shot 2 over on Friday and stumbled into the weekend at even par. He steadied some on Saturday, but not nearly enough to find himself in the mix of players at or around double-digits under par.

Perhaps expectations were a bit too high for the 23-year-old in his Masters debut. There are few other settings that prioritize course knowledge as much as Augusta, and as Morikawa taught us Sunday, that wisdom is often hard-earned.