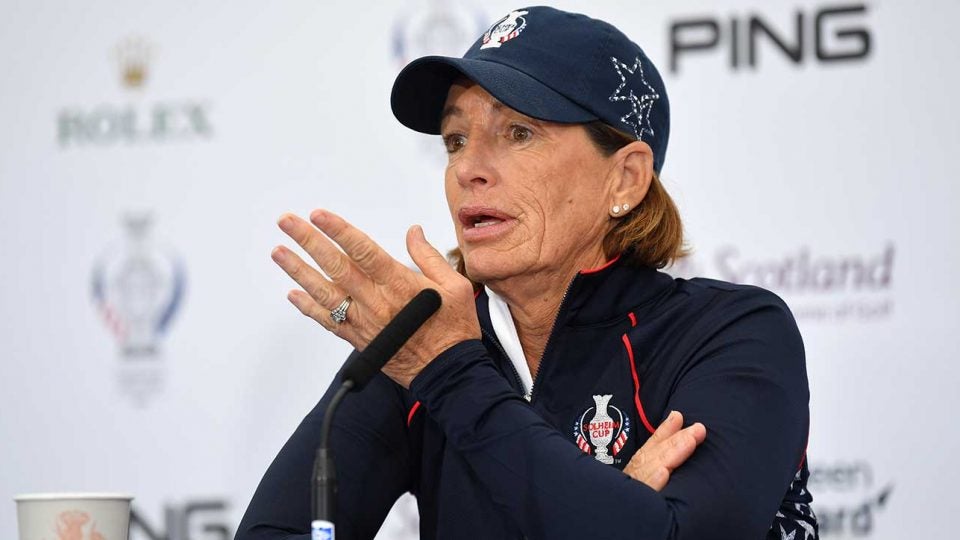 When Stacy Lewis had to withdraw from the Solheim Cup with a back injury on Tuesday, that meant alternate Ally McDonald was now on the roster and that the Americans would send out six rookies — half their team — against Europe beginning on Friday.

But U.S. captain Juli Inkster isn’t worried about their inexperience.

Inkster and her U.S. squad take on Europe in Auchterarder, Scotland, in the 16th Solheim Cup. The Americans are looking for their third straight win, but the U.S. is 0-2 in Scotland despite leading the all-time series 10-5. Europe has three rookies compared to the Americans’ six.

“I have [four players] from last team [in 2017], is that right? So it’s a whole new team,” Inkster said on Tuesday during the team’s press conference. “They don’t know that we’ve never won in Scotland, unless you guys tell them, and I think that’s what’s great. I think if you’re a rookie, I think it’s a lot easier to play away your first Solheim, because you’re really not expected to win and you can go out there and play a little looser. You don’t have the USA crowd pumping you up, and you just rely a lot on your teammates and your team. I think it’s easier to bond over here; you don’t have a lot of outside distractions.”

Inkster, who also captained the previous two Solheim Cup teams (both wins) is going to use her pod system again this week, but she said not every rookie needs to be with a veteran.

“They’ve got to grow up sometime,” she said. “Everybody’s a rookie once. And I just happen to have six of them. So we’re just going to throw them out there.”

Morgan Pressel is the most experienced Solheim Cupper on the roster, followed by Lexi Thompson and Lizette Salas. Pressel needed a captain’s pick from Inkster to make this year’s team, the sixth of her career.

“The pod system has worked really well,” Pressel said. “It’s just a comfort. You know what to expect. You know who you’re going to be paired with. You know how to prepare going into the week.”

Inkster has the same three assistant captains with her this week that she did in 2015 and 2017. The four of them — Inkster (nine), Nancy Lopez (one), Pat Hurst (five) and Wendy Ward (three) — combined to play in 18 Solheim Cups. On Tuesday they were asked the best advice they ever received when they were Solheim Cup rookies. Ward made her debut in 2002 at Interlachen Country Club in Minnesota.