AVONDALE, La. (AP) — Cameron Smith stood on the edge of the 18th green, wiping away tears at a ceremony complete with alligator skin championship belts and a silver chalice.

The 23-year-old Australian, the youngest and least accomplished player left on the course, had been painstakingly close to his first PGA Tour victory – from the final hole of regulation at the Zurich Classic on Sunday night through the fourth playoff hole Monday.

He kept his emotions in check long enough to stick a 58-yard lob wedge within 3 ½ feet of the pin on the fourth playoff hole – the par-5 18th – and sink his birdie putt.

The sequence lifted him and teammate Jonas Blixt of Sweden to the first championship under the Zurich Classic’s new team format. And it finally vanquished the feisty team of South Carolina residents Kevin Kisner and Scott Brown.

Kisner and Brown had rallied with a final round of 12-under 60 on Sunday, capped by a nearly 95-foot chip-in for eagle by Kisner as darkness fell Sunday night at TPC Louisiana. 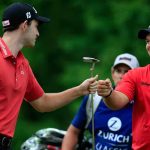 You may also like Tour Confidential: The reviews are in! Did the Zurich’s team format live up to the hype?

“It was pretty cool to knock the putt in for the win,” said Smith, who along with Blixt had missed potential winning putts from 9 to 10 feet on earlier playoff holes. “I guess it would have felt a little bit different if Jonas had done it for my first win.

“To have a putt to win on the PGA Tour when you’ve been working toward it your whole life is a completely different feeling,” Smith added. “It felt like the longest (3 1/2-foot) putt I’ve ever hit.”

The Zurich Classic was the first team event on the PGA Tour since the Walt Disney World National Team Championship in 1981.

The tournament began with 80 teams and players choosing teammates. Many said they chose friends on the Tour rather than research whose game best complemented their own. The new format attracted half of the top 30-ranked players.

For most of the week, players raved about the relaxing conditions. They and their caddies could talk strategy, and players took comfort in knowing their teammates could pick them up. That was especially the case on the best-ball second and final rounds as well as the playoff – players played their own balls and teams took the better score per hole. In the first and third rounds, teammates alternated shots. “You support each other and it feels good to have someone to lean on,” Blixt said, nodding at Smith. “Having a great teammate like him, it’s a walk in the park.”

But, in the end, lining up a winning putt – with $1.02 million and 400 FedExCup points on the line for each winning player – wasn’t much easier.

“I thought after winning twice (on the PGA Tour), it would be a little less nerve-racking trying to finish it off, but it still got me a little bit,” the 33-year-old Blixt said. “Doing it for the third time, I mean, this is the most fun one, I must say.”

Victory in the new format also meant invitations to The Players Championship and SBS Tournament of Champions. It did not, however, provide a Masters invitation or count toward world rankings.

Blixt and Smith never bogeyed any of the 76 holes on the par-72 course carved from cypress swamp west of New Orleans. They led by a stroke after two rounds and by four after three. They had fallen behind by two strokes, with Kisner and Brown birdieing 10 of their first 11 holes Sunday. But they rallied with birdies on Nos. 12, 15 and 16 to regain a one-stroke lead heading into the final hole of regulation, which they wound up having to birdie to force the playoff after Kisner’s clutch chip.

Both teams finished four rounds at 27 under par.

Kisner and Brown took home nearly $412,000 each. They also had the lowest one-round score in team play with their 60, two strokes better than the current course record in traditional stroke play.

Kisner missed a 9 ½-foot birdie putt on the second playoff hole – also 18 – that could have won it.

“We were close, had a chance there and I just didn’t get it done,” he said. “But we’ll be back next year.”