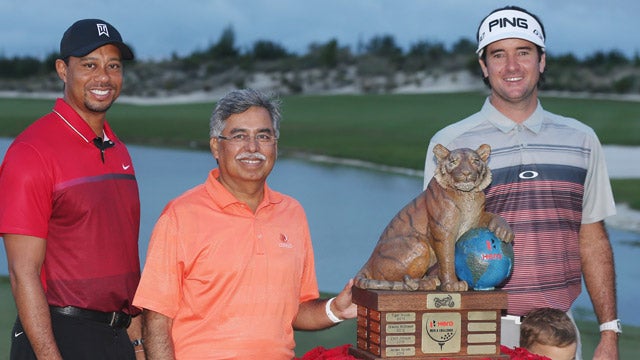 Tiger Woods, Pawan Munja of Hero Motocycles and Bubba Watson pose with the trophy after Watson's three-stroke victory at the Hero World Challenge at Albany, The Bahamas on December 6, 2015 in Nassau, Bahamas.
Getty Images

The Hero World Challenge was basically Bubba Watson’s career in microcosm: spectacular shotmaking, GIF-worthy on-course histrionics and public pronouncements that veered from the sincere to the cringe-inducing. At the trophy ceremony, after Watson had shot 25 under at Albany Golf Club in the Bahamas, tournament host Tiger Woods hailed Watson for “destroying our course.”

Watson took the microphone and said he liked the place so much he was thinking of buying a home there. That drew a predictable cheer from the smattering of proud Bahamians. Watson would have been wise to end it there, but he mentioned he was selling his home in Isleworth, the one he bought from Woods after the career-altering domestic dispute that took place there six years ago. “So Tiger, if you want to buy it again …. ” Watson said. There was an awkward pause, and Woods offered a forced smile. “Sorry,” Watson said, laughing nervously. Tiger’s smile got tighter. “It’s got a few majors in it,” Watson said, trying to rally. Tiger didn’t smile.

Watson’s awkwardness is like his typical tee ball: prodigious. During the first round he created an Internet sensation when, after an approach shot went awry, TV microphones caught him bellowing, “It’s a mudball. MUUUDBAAALLLL!” On Saturday, Golf Channel’s Jerry Foltz was whispering from 50 yards away, but Watson complained he was being too loud. Later in the round, Watson glared at what he thought was a restless fan, only to discover it was a duck. Bubba means well. The real reason he is selling Woods’s old house is because he’s moving to Pensacola, Fla., so he can be more active in the community where he grew up. This was the ninth career victory for the late-blooming Watson, 37. It doesn’t count toward his PGA Tour total, but given that six of the top 10 players in the World Ranking were on hand, and Woods is a longtime inspiration, Watson said, “It’s very big for my career.” But in the next breath Watson allowed that it didn’t really matter at all.

“Truthfully, my goals have changed over the years,” he said. “And watching Tiger Woods, what he’s done for the people off the golf course, my goal is now stretched to that. I think I can do more off the golf course. Golf has given me so much, why not give back? At the end of the day, when I’m passing away, nobody’s going to think about, Man, you only won nine times. They’re going to think about all the other stuff I did.”