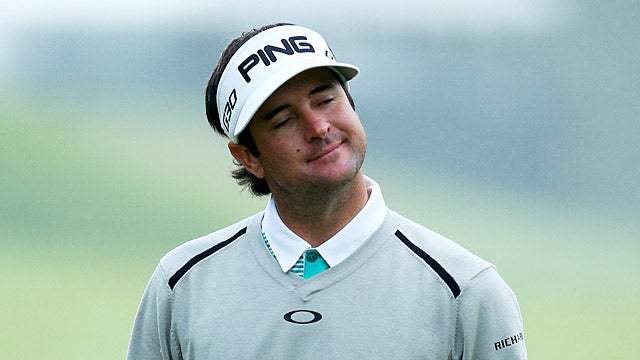 Well, we were overdue for another Phil Mickeslon mini-scandal, and this is one of the better ones. Big money and a whiff of illegality is always a good start, but what makes this money laundering newsbreak so delicious is the timing: Phil is now sailing headlong into the hurricane of the British press. Oh, the possibilities are endless!

For my money – which, by the way, has not yet been deposited in an offshore account – the Q & As with Mickelson are going to be at least as entertaining as anything that happens on the course at Gullane or St. Andrews.

1. Bubba. Yeah, the guy has issues, but golf is sooo much more interesting with him around. 2. Greenbrier. In an otherwise quiet week, we get a perpetual 59 watch and the ongoing spectacle of Tiger Woods. All things considered, I’ll take it!

3. NYC. Now that is how you close out a tourney: hole-out from the fairway on 16, stuff it to a foot on 17. Na Yeon Choi may barely weigh 100 pounds but she’s got as much heart as anyone in golf. 4. Tom Watson. Coming within one of shooting your age is macho anytime, anywhere. Doing it at a national championship? Vintage Watson.

1. Paul Casey. His consistently good play this year has been fun to watch, but that implosion in the Hartford playoff was downright fugly.

2. The dude who shot a 57. There are two problems: most people are dubious, and he still didn’t break Kim Jong-il’s record.

3. Donald Trump. If he’s not careful, the golf firmament is going to have two words for him: you’re fired. 4. Stacy Lewis. The hometown favorite had the lead on the final nine holes and coulda blunted Choi’s surge but she missed a ton of putts on the back nine, including a 6-footer on the second-to-last hole. That’s now 27 starts since Lewis’s last win. 5. Retief Goosen. Remember him? He had a share of the lead during the final round at the BMW International Open but promptly hit it in the water and faded away. Amazing to think that Goose was one solid round away from the Hall of Fame. Instead, he self-immolated on Sunday at Pinehurst in ’05 and has never been the same since.