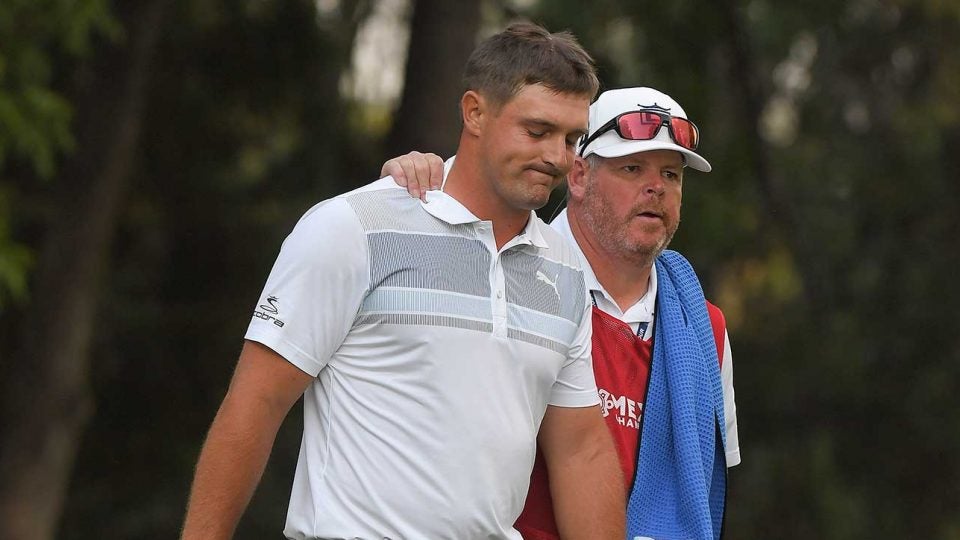 Bryson DeChambeau walks off the green after the final round of the WGC-Mexico.
Getty Images

Bryson DeChambeau let a victory slip away, yet he was green-side to congratulate Patrick Reed on his victory at the WGC-Mexico Championship on Sunday night.

DeChambeau led the majority of the back nine, but a three-putt bogey on 17 paired with Reed’s three straight birdies flipped the leaderboard. DeChambeau left his birdie try on 18 short and even though Reed bogeyed 18 he still clipped DeChambeau by one. DeChambeau was watching from the clubhouse but went to the green to see the finish. But why did he feel the need to?

“Because he’s a great player; there’s been a lot of stuff said in past years, I guess you could say, with him, and even with me, I feel like unfortunately sometimes we get quite a bad rap,” DeChambeau said. “And yeah, there’s things that we’ve done that hasn’t been right, but we haven’t really got the best rap. We’re still trying to provide great entertainment for everyone. He’s a great player, and he’ll be a great player for a long time, and I have a lot of respect for his game.”

News
Patrick Reed’s win quieted the noise, but for how long is anyone’s guess

As DeChambeau alluded to, both players have had their names swirl up in controversies over the years, even this week. For Reed it came via comments made by Brooks Koepka and Peter Kostis about his rules infraction in the Bahamas. (Even though Reed chose to stay out of that.) DeChambeau’s most recent criticism came via a Twitter mob after a little outburst he had on a green on Saturday.

“I mean, look, I guess you could say we’re coworkers, right, and we understand each other’s pain sometimes,” DeChambeau said.

DeChambeau birdied four of the first five on the back nine before playing the last four in one over. Still, his solo second was his best PGA Tour finish since he won the Shriners in November 2018. It’s also his best finish sine he bulked up in the offseason.

“The last two weeks I’ve put myself in contention to win,” he said. “I feel like the game, driver is coming back, which is awesome. Irons are starting to get there. Miss-hit a couple iron shots coming in. I’ve just got to work on that. There’s a couple reasons for that. And unfortunately 17 happened today. I hit a good shot up there, I didn’t try to do anything, it just got caught by the wind and spun off the hill, and ended up having a long putt in. Unfortunately my speed was off today, and that’s the tournament right there. If I don’t three-putt I win. At the end of the day I’ve got to look back on it as a positive no matter what.”