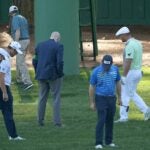 Bryson DeChambeau looks for his ball on No. 3 at Augusta National.

AUGUSTA, Ga. — It’s hard to believe just how many things had to go wrong for Bryson DeChambeau to lose his golf ball on the 3rd hole at Augusta National on Friday. A return to the scene of the crime some 30 minutes later revealed some clues about how the most-anticipated golfer at this year’s Masters lost a tee shot in plain sight.

So how did it happen? Let us count the ways. Sure, there was the golf shot itself, which was a contributing factor. DeChambeau was three under par for the tournament when he pulled driver on the short par-4, hoping to land his tee shot on or around the green, some 350 yards away. He yanked the shot slightly left of his target line, and when the ball eventually came down from orbit (DeChambeau likely hits it higher than any golfer in the history of the PGA Tour) it settled somewhere in the left rough.

But that on its own should not have been much of an issue. Had DeChambeau found his ball, he would have been left with a tricky pitch shot to an elevated green — but from 50 yards and a nice lie, plenty of things are possible. Instead, what followed was a frantic search-and-rescue operation that resulted in a lost ball, a re-tee and a triple bogey that ejected him from contention.

So what happened to the ball? It was there the entire time. A gallery guard found it just minutes after the official search had ended, no more than 10 feet off the fairway. The ball was plugged and only visible to someone right on top of it, but it was still shocking to essentially lose a Bridgestone in plain sight. The basic problem?

“We were looking in the wrong spot,” one spotter said. “If we’d have been in the right area, we’d have found it, no problem.”

So what happened instead? A perfect storm of bad things:

There was a very literal perfect storm — a thunderstorm — yesterday morning. Augusta National is soggy. Balls are plugging in the ground. If it weren’t so wet, that ball would never have been lost to begin with.

Augusta National’s rough isn’t usually nearly this juicy. I haven’t heard an official explanation as to why things are looking so shaggy off the fairways, but they are. With shorter grass, it would be much easier to see a plug mark and find an embedded ball. Instead it hid in the long grass.

The ball’s final resting place was just a couple yards off the fairway, but like Tom Hanks in Castaway or Oceanic 815 in Lost, the search party had the wrong coordinates. They were looking in the wrong place! DeChambeau himself thought the ball was further left than it actually was, and as a result the clock ticked on as the ball lay idly by.

The gallery guard who found the ball said it took just a few additional minutes of searching to track down the Bryson Bridgestone. If the time allowed to find a golf ball was still five minutes instead of three (the rule change took effect at the beginning of last year) there’s a good chance the group would have found the ball.

There weren’t really spotters in the area where DeChambeau’s ball landed. There were a couple volunteers in the area and there were several manning the adjacent scoreboard, but balls don’t generally get lost in plain sight at Augusta National, a golf course with very little rough and impeccable conditioning. Instead the main information the searchers had to go on was DeChambeau’s line from the tee and the sound of the ball landing. Those volunteers in the area expressed regret at not being able to find the ball despite their best efforts.

Had there been fans in attendance, they would have been lining the fairways, especially for DeChambeau, who entered the week as the biggest story in golf. Would everybody in the gallery have seen the ball land? Certainly not. But at least one somebody would have. And when the search began, those spectators would have joined in to help out. There’s power in numbers, especially when it comes to finding golf balls.

Instead, the search party numbered no more than a dozen, scanning the ground for signs of life as the scoreboard loomed in the background, serving as a reminder that other golfers’ rounds were moving in far more favorable directions.

In sum, the hole marked an unfortunate sequence of events. A triple bogey. A second 7 in as many days. And a reminder that golf, like many other things, can be painfully unfair.

The spotters looking for the ball said they decided not to tell DeChambeau when he returned to the green to finish out his triple. It’s hard to know what would have been more frustrating, anyway: Is it worse to not know? Or is the ultimate frustration knowing just how close the ball was the entire time?

But DeChambeau clarified after the round that one man approached him on the next tee to inform him that the ball had been found shortly after the search.

“It definitely throws you for a loop when the guy goes and gives you the ball on the 4th tee box, like, ‘Oh, I found it!'” he said. It’s impossible to know whether there was any cause-and-effect, but DeChambeau bogeyed the next two holes, too, before righting the ship. He would go on to make the cut on the number.

One quote stuck out from the entire situation, a question DeChambeau asked of rules official Ken Tackett mid-search that summed up the disbelief behind it all: