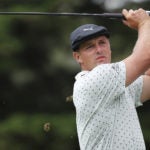 Bryson DeChambeau is picking his spots on the weekend at the PGA Championship.

Bryson DeChambeau raised some eyebrows early in the week at the PGA Championship when he laid out an aggressive game plan for attacking TPC Harding Park. He said, essentially, the following:

1. The course is playing long.

“I think this golf course suits a bomber, if you can hit it straight,” DeChambeau said.

“I’d say it’s pretty straightforward, to be honest with you,” DeChambeau said. “There’s not really too much to it if you can keep it in the fairway this week.”

4. The rough is playable.

“As the rough stands right now I think the risk is definitely worth the reward,” he said. “Yeah, so for me as of right now I’m going to hit it up there as far as I can and hopefully wedge it close and making some putts this week.”

No. 4 drew the most attention — and even some criticism — from fans and analysts who thought DeChambeau sounded brash or were disappointed by the idea of a low-rough setup. But thus far, he’s largely been proven correct. Harding Park has felt bearish, challenging and straightforward, with bombers crowding the leaderboard. Still, DeChambeau said that as the week has gone on (and the rough has continued to grow) he’s had to make adjustments to his theory.

“I said this week I felt like the rough isn’t that penalizing; well, it is now,” he said after a third-round 66. “It grew and they haven’t cut it, so that’s a major, right?”

One place DeChambeau decided to dial it back was off the tee on the drivable par-4 16th. Despite his prodigious length, he decided to lay up on the reachable par-4 with a 4-iron. The plan seemed to work; he found the fairway, hit a wedge to 17 feet and rolled in the putt. Nice 3.

“If I hit it driver and it goes left over the bunkers, it’s in the water and I have no chance to get it up-and-down,” he said, explaining his risk-reward calculations. “If I had a chance to get it up-and-down, that may have been a different story. But I felt like I could just hit a 4-iron down there and hit it on the green and make a putt. And that’s what I he mean by being a little more tactical out here. To win major championships — on this golf course, at least — you have to be tactical.”

The strategy seemed to emerge out of DeChambeau’s first 36 holes, when he hit just 11 of 28 fairways and made 10 birdies but 8 bogeys, too. Saturday he hit 9 of 14 fairways and charged up the leaderboard. Still, he’s hardly holding back — DeChambeau is second in the field in driving distance behind only Cameron Champ.

DeChambeau sits three shots back of the lead beginning Sunday. His final round playing partner? Perhaps the Tour’s longest natural hitter, Tony Finau. While Finau catches flak for his final round woes, it’s Bryson who has yet to record a top-15 finish in a major. On Sunday, he’s working to play within himself.

“It was just something I wasn’t comfortable with in majors; higher expectations,” he said. “This is the first major with this new body, new swing. I hope it’s only going to get better.”

Entering Sunday’s final round, DeChambeau has an evolving game plan and a fighting chance at the win — but he’s not allowing himself to think about that Wanamaker Trophy.

“No. No. I won’t, at all. That’s a great question. For me, it’s about the process, and I’ll be thinking about the shots and executing the right shots and putting myself in the right position to win,” he said. “If I give myself a couple shots going into the back nine, being that close to the lead or even hopefully up at the top of the leaderboard, that’s the goal that I’m looking for, and it’s these small intermediate goals that every single hole is going to probably be changing, but then going back to executing every shot the best I possibly that. That’s really what I’ll be thinking about.”

There’s making a plan and then there’s sticking to it while in contention at the final round of a major championship. Sunday afternoon, DeChambeau will put his process to the test.