‘Definitely was more of an accountant today:’ Bryson DeChambeau fires a career low Sunday at the Open 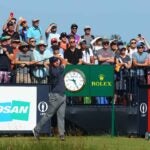 Bryson DeChambeau hits his tee shot on Sunday on the 2nd hole at Royal St. George's.

This did not suck.

Bryson DeChambeau, after a week in which he said his driver did, then the club manufacturer’s responded in kind, then DeChambeau said he did, went out and did this during Sunday’s final round at the Open Championship at Royal St. George’s:

Five-under 65, his career-low round in a major.

“Finishing five under is a good feat given it’s the Sunday of an Open Championship, and I think that I’ll learn a lot from this going into next year,” said DeChambeau, whose 65 bested the 66s he shot twice previously at majors. “It’s one of those things that for me it’s going to take time probably to learn the whole ins and outs of Open golf.

“I don’t think I’ll ever figure it out, but hopefully one year I can get some of the right breaks going for me and hitting really good with all facets of my game and give myself a great chance to win an Open Championship.”

On Sunday, DeChambeau birdied holes 1, 7, 12, 13 and 14, and bogeyed none. He had bogeyed 11 this week, and double-bogeyed another. Perhaps more notable was the fact DeChambeau hit seven of 14 fairways on Sunday, which trailed just the 10 he hit on Friday for his most-accurate day off the tee for the week.

It was those first shots where his Open unraveled after just 18 holes. During Thursday’s first round, he hit four of 14 fairways, then faulted his driver after the round, saying: “That’s what I said yesterday or a couple days ago: If I can hit it down the middle of the fairway, that’s great, but with the driver right now, the driver sucks.

“It’s not a good face for me, and we’re still trying to figure out how to make it good on the mis-hits. I’m living on the razor’s edge like I’ve told people for a long time. When I did get it outside of the fairway, like in the first cut and whatnot, I catch jumpers out of there and I couldn’t control my wedges.

A few hours later, Ben Schomin, Cobra’s tour operations manager who doubled as DeChambeau’s caddie two weeks ago, expressed his frustration with the world No. 6’s comments while speaking with Golfweek’s David Dusek, comparing them to those of an “8-year-old that gets mad at you.” DeChambeau then would apologize, posting on Instagram: “The comment I made today in my post round interview was very unprofessional. My frustrations and emotions over the way I drove the ball today boiled over. I sucked today, not my equipment.”

On Sunday, a reporter noted that DeChambeau played “more economics than accounting today. It seemed to be more risk mitigation than kind of profit maximization.”

“I tried to do that all week,” DeChambeau said. “There was a few times where the driver got me into a few bad places, and then obviously I had a couple of 4-irons get me into bad places yesterday. It’s difficult out here. You’ve got to really manage yourself and make sure you’re hitting it to right parts of the fairway.