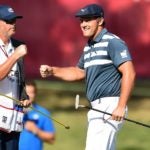 Bryson DeChambeau has suddenly found himself in an enviable position: betting favorite for each of the majors.

Bryson DeChambeau’s 2020 season to date has been impressive. Really impressive. Bryson’s won once, racked up eight top-10 finishes and broken a 15-year-old driving record. Mere months after reconstructing his swing to maximize speed and power, he’s second on Tour in Strokes Gained: Off The Tee and Strokes Gained: Total. Many, including this site, have wondered aloud whether we’re witnessing Bryson begin a distance revolution akin to the one spurred by Tiger Woods in the early 2000s.

But if you don’t believe the numbers, perhaps it’s better to let the money do the talking. After Bryson’s convincing win on Sunday at the Rocket Mortgage Classic in Detroit, one sportsbook has already made him its betting favorite for each of 2020’s three major championships.

Jeff Sherman, who is VP of risk management at Sportsbook USA, tweeted out his book’s updated major lines Monday. DeChambeau is 10/1 to win the Masters, U.S. Open and PGA Championship, besting Rory McIlroy and Tiger Woods’ odds in all three events.

The lines represent a stark change from a year ago, when the first futures odds had DeChambeau at 30/1 to win the Masters. Those odds were the 14th-best of any player, behind the likes of Rickie Fowler, Tommy Fleetwood and Patrick Cantlay.

Of course, the 26-year-old DeChambeau is only beginning to approach the peak of his career and as a result, is far from a polished product in big moments. His best career finish in a major is T15 at the 2016 U.S. Open at Oakmont. He only made the cut at a single PGA Championship and Open Championship, respectively.

But still, the shift in his odds is significant, if for no reason other than to underscore the depth of the impact his transformation has had upon the game of golf. Bryson, long one of the game’s most enigmatic figures, is slowly becoming one of its most necessary.

As we grow ever-closer to an abbreviated major championship season, one thing remains clear: the smart money is on Bryson DeChambeau.