Sergio Garcia’s shocking antics last week that led to his disqualification from the Saudi International ignited a chorus of criticism throughout the game. Now you can add another critic to that list, Brooks Koepka, who chastised Garcia on Tuesday for acting “like a child.”

During an interview on the Playing Through Podcast, Koepka spoke honestly and directly, expressing how “frustrating” Garcia’s display of “disrespect” was in Saudi Arabia.

“To act like a child out there is not cool,” Koepka said on the podcast. “It’s not setting a good example and it’s not cool to us, showing us no respect or anybody else.” 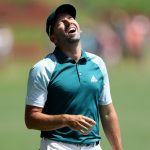 You may also like #AskAlan: What’s worse, Sergio’s tantrum or the Euro tour’s reaction?

Garcia was disqualified from the European tour’s inaugural Saudi International tournament after he damaged as many as five greens at Royal Greens G&CC during Saturday’s third round. His deed was uncovered when multiple groups playing behind him complained to tournament officials.

Then on Monday, video surfaced of Garcia throwing a temper tantrum in a bunker during the second round, slashing his wedge in the sand repeatedly before erupting with a string of expletives.

Koepka, who defended his U.S. Open title last year before winning the PGA Championship, also played in the controversial European tour event. He made a point to state that effect of Garcia’s actions extends beyond that one tournament, and suggested they showed a greater lack of respect for the game of golf, saying, “it’s frustrating as a player to see, to act like that, to disrespect everybody.”

As for the argument that Garcia had legitimate complaints about the conditions of the course in Saudi Arabia, Koepka shot that down quickly, too.

“It’s unfortunate that he’s got to do that and complain. Everybody’s got to play the same golf course. I didn’t play very good, but you didn’t really see anybody else doing that. You’re 40 years old so you gotta grow up eventually.”

Both players are taking the week off, but we will see Garcia again very soon at next week’s Genesis Open at Riviera, where he will no doubt be bombarded by further questions about the incident. Koepka has yet to confirm whether or not he will play in LA.