Every week, GOLF senior writer Alan Shipnuck fields questions from the masses about hot topics in the golf world. This week, Shipnuck takes on Rickie’s shaky win in Scottsdale, the recent glut of Rules infractions, Sergio’s Saudi meltdown, pairing ideas for Ho-sung Choi at Pebble, which pros would be most likely to pass on a round with the President, and much more.

Fowler has long been golf’s Rorschach test – is he a great player and ambassador or an overhyped underachiever? A style icon or a dude trying way too hard? This latest victory is equally confounding: should it be remembered for the gritty finish to seal the win or the wild, woeful golf that preceded it? Yes, Rickie was lucky that no one else made a run on a tough weather day, but in the final analysis he birdied two of the last four holes to pull it off, and to me, that’s all that really matters.

Why are rules infractions happening so often now? Is it down to the amount of TV coverage, replays of everything giving officials more chance to spot things? Should there be a ‘spirit of the rules’ committee rather than an anally-retentive application of the rules? -@Fairway_59

The bitterly funny thing is that this latest batch of rules revisions was supposed to make the game simpler and more accessible! (Face-palm.) Since at least the turn of the century there has pretty much been wall-to-wall TV coverage, so I don’t think that’s a big factor here. For sure, cell phone-wielding fans can capture more stolen moments (think P. Reed bitching to a rules official that he wasn’t getting the Spieth treatment) but I can’t think of any penalties that have resulted from this newish technology. I think the latest batch of controversies might result in the PGA Tour assembling its own subcommittee to streamline and reinterpret the rules for its competitions. That doesn’t bother me; the pros are already playing their own game, and, as you suggest, this could head off some of the embarrassing hair-splitting that hurts the Tour’s product. The rest of us will continue to muddle through, trying to remember the difference between a red stake and a yellow one.

The whole thing is epically dumb, including today’s Twitter discussion about whether or not the Euro Tour is hiding tapes of the incident, which I doubt. The controversy was the perfect ending to an exercise in cognitive dissonance. No one really wanted to spend a week away from their family in Saudi Arabia. The players took the filthy lucre, only to have to muddle through an event with no fans, no buzz, no meaning, and related questions about their greed, judgment and myopia. No doubt all of this contributed to Sergio’s mental breakdown. Meanwhile, Euro Tour supreme ruler Keith Pelley spent the week getting savaged in the press for having the gall to even stage such a tournament – the last thing he wanted to do was create an ongoing controversy by suspending one of his biggest stars. Better to pull an MbS and just cover-up the whole thing as if it never happened. In Pelley’s case, he’s lucky there is no surveillance footage of the crime. 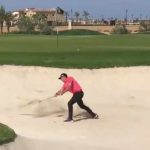 You may also like WATCH: Sergio Garcia’s shocking bunker meltdown at Saudi International

What’s the line to the “appropriate” level of anger someone can let out on the golf course? Loud expletive? Slammed club? Shaft snap over the knee? Whole bag thrown in the lake? #AskAlan #AskingForaFriend –@Spencer_Wideman

Profanity is as much a part of golf as bogeys and double bogeys. A good club-slam can also be therapeutic. But both are situational – the key is to not offend anyone nearby. Do my buddies care if I go off occasionally? Not at all. If I’m playing in a PGA Tour pro-am and there are kids nearby? Gotta hold it in. Snapping clubs can be dangerous – the broken steel is sharp! Throwing clubs is lame, although undeniably funny. But one thing we can all agree upon is that damaging the golf course is the ultimate no-no.

Who should be paired with Ho-sung? -@NickGoblirsch

Gawd, I wish Steve Elkington was in the field – he’d have an aneurysm!  Pat Reed would be a fun choice, as his suffering would be exquisite, and, honestly, he might learn a few things about not taking himself so seriously. Among the other guys who are teeing it up this week, how about Kuchar? He’d have fun with it and could definitely use the image-rehab. There are plenty of other amiable pros who would hopefully give Choi the welcome he deserves: Paul Casey, Brandt Snedeker, Tommy Fleetwood. As we know, golf has a unique ability to look fusty and out-of-touch. Whomever is paired with Ho-sung, I hope they will have the good sense to understand fans love this guy and any grumbling/whining is not only a killjoy but simply bad form. 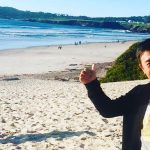 Oh, man, us local golfers talk about this all the time. It’s such a mediocre course on such an incredible piece of land. Of course they should blow it up and start over! The original designers – the unholy trinity of RTJ II, Tom Watson and Sandy Tatum – were hamstrung by numerous environmental restrictions. Perhaps three decades later there could be some relief to build a better course. Here’s hoping.

#AskAlan Who loses his hair first, Jordan or JT? -@CountDownDave

This is actually quite a riveting battle. I’m gonna say Spieth by a hair.

Love him or hate him, Trump is a polarizing figure. How will Jack’s overt support affect his popularity and legacy? -@LabLoverDE

Jack’s legacy is being the greatest golfer of all time. (Tiger is the most dominant, Hogan the most heroic.) Playing golf with the President of the United States doesn’t diminish Nicklaus’s accomplishments in the least.

Which pro(s) would likely pass on an invite from the President to tee it up? -Ron (@PressingPause)

Peter Malnati. I doubt Rory would do it again! Phil. Camarón.

I know you’re a big proponent of single-length irons. I simply can’t adjust to the short irons. How about 4-7 in single-length but 8-Wedge in standard length? -Richard (@jrmdbl07)

Sure, why not? I’m not that dogmatic – do what feels right! I just dropped my long sand wedge for one that is standard-length because I feel more comfortable and effective on touch shots from 75 yards in. On the short-irons you could also trim the length by half an inch or an inch and see how that feels. Everyone is different, we don’t all have to be locked into the same specs.

Can you give us a soup-to- nuts report on how big a win is for a young PGA Tour player – not just the invites, but the endorsements and other opportunities that open up? -@FrazerRice

There is an immediate payout in bonuses built in to any existing endorsement deal. For a young unknown, they would be in the $50-100K range, which is not nothing. The exemption is the most precious reward: two full years, plus the remainder of the season in which you have won. That job security is priceless and then leads to more endorsement deals, because companies know you’ll be around for a while. Each win is worth 500 FedEx points, which pretty much guarantees a spot in the playoffs, as last year it took only 377 point to make it (and 809 to reach the BMW). To me, the biggest short-term benefit is all the upper-echelon events you immediately gain access to, with their huge purses and excess of World Ranking points. Take Adam Long. His out-of-nowhere win at the Hope got him into the following tournaments: Bay Hill, Players, Masters, Hilton Head, PGA Championship, Colonial, Memorial, and then next year’s lid-lifter at Kapalua. Talk about a career upgrade!

#AskAlan: Is a Masters invite as important for a veteran pro like Kuchar, Westwood, and Howell III as it is to a young guy like Champ? -@david_troyan

It’s more important for the codgers! Chuck Howell has waited a dozen years to get back, and this might be his last sniff. Westy would probably kill for one more chance. But you have to figure Champ will have many opportunities to attack that golf course.

Is there more pressure on Rory to win Augusta or The Open at Portrush? #AskAlan -@JoshColey

Oh, Portrush for sure. I’m not sure anyone expects Rory to win a green jacket anymore, given his star-crossed history at the Masters and the fact that the course exposes his biggest weaknesses. But he’s already won an Open and this will be the only one contested on his home soil during his prime. The pressure will be immense.

Will winning the FedEx Cup ever carry equal prestige to a major victory? And if so, in how many years until we get there? -@NickBeaulieu

It can never happen because the Cup is about nothing but money, and who really cares about Have-Mores vacuuming up more Gulfstream dough? Thought exercise: how much does a player take home for winning the Masters? No one knows or cares because that’s not what it’s about.