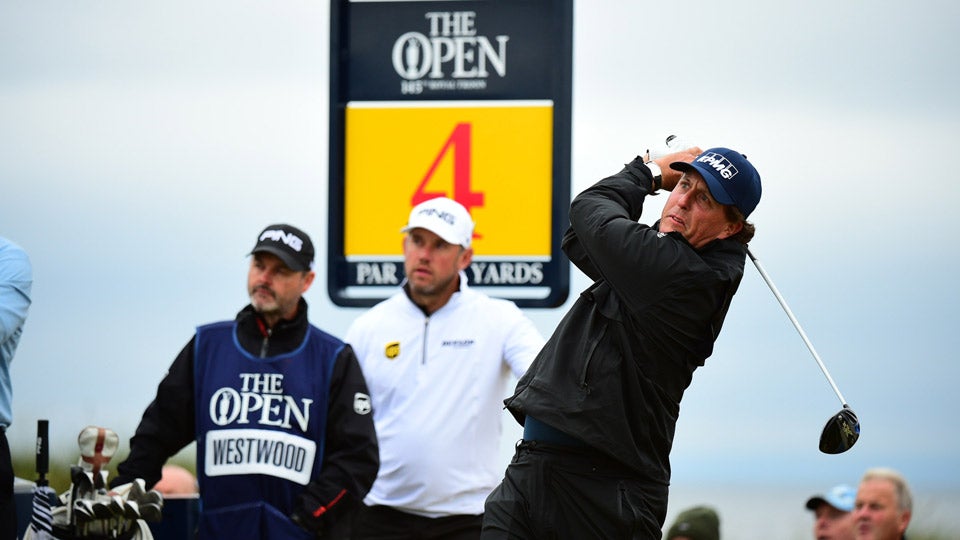 Phil Mickelson during the second round of the 2016 British Open at Royal Troon.
Getty Images

Phil Mickelson is still in the driver’s seat after a second-round 69 put him at 10 under par and ahead of Henrik Stenson (65) by a shot. Here are five other things we learned from round two at the 145th British Open at Royal Troon on Friday:

1. The late-early group, who teed off late Thursday and early Friday, got a break, and the difference was most pronounced Friday afternoon. “I feel like I’ve played really good the last two days,” said Rory McIlroy (71, -2), who is nonetheless eight shots behind. Jason Day (70, +1) said he felt like he’d shot a career round. Jordan Spieth (75) described the weather as the kind of crud you want to see on a Scotland buddy trip, not on a tournament day. Better luck next time, guys.

2. Friday reminded us how quickly everything can change in a major, not just the weather. Exhibit A: Billy Horschel shot 67 Thursday and was right in this thing, but things got away from him in a big way Friday, when he went 12 over from holes 6-14. Bye, bye, Billy. Justin Thomas shot 31 on the front nine Thursday, 40 on Friday. That’s the Open. That’s major championship golf.

3. Danny Willett is nursing either a Masters hangover or a new-dad hangover or both. Granted, he had the bad end of the draw, playing through sideways gusts late Friday, but it qualified as a highlight that he made a putt at the last to shoot 75 and survive the cut at four over par. Playing partners Jason Day (70, +1) and Rickie Fowler (72, -1) beat him by five and three shots, respectively. 4. Dustin Johnson, who has won his last two starts and would go to No. 1 with a victory at Troon, is not out of this thing despite some sloppy play Friday. He hit fewer than half the fairways, made two double-bogeys (7 and 11), and still shot 69 to get to two under. If Johnson can clean things up from tee to green, look out.

5. As much as we try to over-analyze golf it often comes down to simply keeping the ball in play. At the 2014 Ryder Cup, Team USA captain Tom Watson made light of Mickelson and Keegan Bradley’s inability to hit a fairway between them. So far, Bradley (68, -7) has hit 22 of 28 fairways and is tied for sixth in that category. His old partner Mickelson, who has made light of the wildness off the tee that has defined his career, is also in the top 10 with 21 of 28 fairways hit.