British Open 2015: The Ghosts of the Old Course at St Andrews 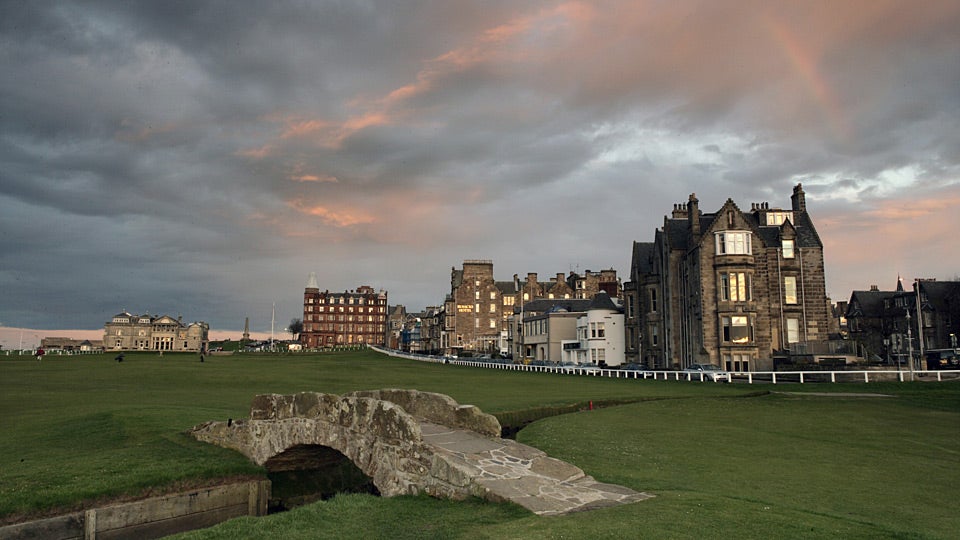 This week marks the 29th Open Championship to be played on the Old Course at St. Andrews.
Bob Martin For Sports Illustrated

ST. ANDREWS, Scotland — This is a town for ghosts. Some of them are even dead.

You’ll see and hear them aplenty if you wander around the Old Course, this fabled spit of land where golf has been played since the 1500s and which this week hosts the Open Championship for the 29th time.

A few feet to the right of the 18th green sits a small building in the familiar grey stone style that might convince visiting aliens that Scottish law permits just one architecture style and bans paint entirely. That is the pro shop of Old Tom Morris. Or it was. Today it sells an eponymous upscale clothing line, somewhat ironically since extensive photographs of Morris suggest he never passed the front door in anything except the same heavy wool jacket.

Morris authored the first shot ever struck in the Open, in 1860 at Prestwick. He won it four times, then served as the “keeper of the green” at the Old Course for 39 years. A few doors down from his shop, alongside the 18th fairway, is the New Golf Club, where Old Tom fell down the stairs and died at the age of 86. That was in 1908, which is just last week in St. Andrews years. His great-great-granddaughter, Sheila Mould, is his last surviving relative and still lives above the shop.

Stroll a little farther out on the links and you might sense the aggrieved ghost of Bobby Jones. He was just 19 when his tee shot found a bunker on the par-3 11th hole in the 1921 Open, and several fruitless swings later he tore up his scorecard and disqualified himself from the event. “Master Bobby is just a boy, and an ordinary boy at that,” the local press sniffed.

Jones’ ghost may be a little more cheerful now. He returned here to win the Open in 1927 and the British Amateur in 1930, which was one leg of his Grand Slam. In 1958, Jones, by then crippled with a degenerative disease, was given the freedom of the city in an emotional ceremony, at the end of which locals sang the traditional Scottish folk song, “Will Ye No Come Back Again?” The following morning, Jones asked to be taken out to see the Old Course. He never returned.

Not all the ghosts of the Old Course are dead.

Tommy Nakajima is still out there somewhere. He was only 23 during the 1978 Open in St. Andrews. His caddie was even younger: 15-year-old Neil Ballingall, who was looking for summer job when a coin flip landed him the bag of the little-known Japanese pro. Nakajima was tied for the lead in the third round when he hit the green of the par-4 17th in two and walked off with a nine.

He putted into the cavernous Road Hole bunker and needed four swipes to extricate himself. “Sorry, Neil,” he said softly to his caddie as he walked, stunned, to the 18th tee. He never seriously contended in a major again, but did earn his spot in the history books with what became known as “The Sands of Nakajima.”

Some ghosts are playing this year in the 144th Open Championship.

Tom Watson is indisputably the greatest links golf exponent America has ever produced. He was a five-time Open champion and on the cusp of a record-tying sixth win (and third in a row) when he stood in the fairway of that same 17th hole in 1984. He pushed his 2-iron approach shot over the green, across the road and up against a wall. His agonizing bogey left him second to Seve Ballesteros.

I once asked Watson what effect that shot had on his career. “What do you mean?” he asked. I pointed out that he had won 36 PGA Tour events in the decade before hitting that shot but only once in 12 years after it. There was a long, stony silence. “That shot had no effect on my career,” he finally said, coolly. He was the best in the world, by a margin, but St. Andrews made a ghost of him at age 34.

And then there is Doug Sanders. On a grey, overcast Tuesday in St. Andrews Sanders looked no less a peacock than he did when racking up 20 wins on the PGA Tour. He just moves more gingerly, befitting a man who turns 82 next week. He wore a bold sweater, crisp white pants and luminous orange shoes, but despite the colorful cut of his jib he is perhaps the saddest figure in town.

He moved along the range from station to station, politely asking today’s stars to sign things for him, stopping to share stories with veterans like Jim Furyk. It’s hard not to wonder if some of the kids even know who this eccentric figure is, and who he so nearly was.

Last Sunday marked 45 years since Sanders missed a 30-inch par putt on the 18th green of the Old Course. Had it dropped, his name would have been etched on the claret jug alongside the greatest players in the game. But it didn’t drop. He lost an 18-hole playoff the next day to Jack Nicklaus by a single stroke and was never a factor in a major event again.

“Over the last 45 years I’ve thought about that putt more than anything,” he told the Daily Mail this week. “I used to joke that I could go as long as five minutes without thinking about it. But as I get older, I don’t lose so much sleep over it.”

Sanders is a ghost who haunts the scene of his death. This is the eighth Open for which he has returned to St. Andrews since that putt slid by its target. He says he loves the town and that the people of St. Andrews are like family to him. “You can go broke with dollars and cents but not with the people’s affection. That is why I am back at St. Andrews,” he said.

Or perhaps he comes back because it’s the only way an old man sees himself being relevant in a game he loves, at the cost of reliving–however painful it might be—the only shot he ever hit that history remembers. Sanders isn’t a ghostly figure in places like Augusta or Pebble Beach. Only in St. Andrews. And here he’s only one of many the Old Course created and sustains.