British Open 2015: Can Tiger Woods Win the Open? It’s All About What You Believe 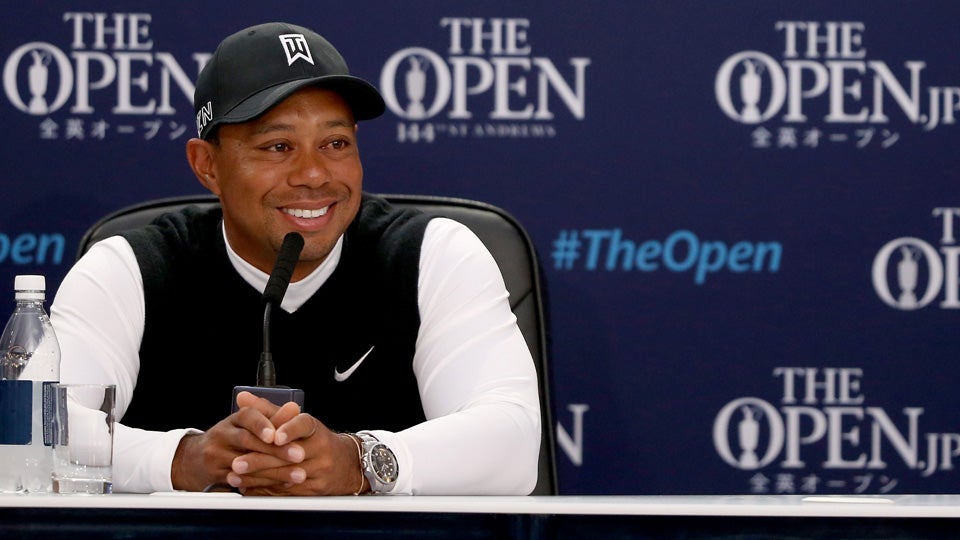 Tiger Woods smiles during a press conference ahead of the 144th Open Championship at the Old Course on July 14, 2015, in St Andrews, Scotland.
Getty Images

ST. ANDREWS, Scotland—Tiger Woods has had a season to forget, but he still believes he can win this 144th Open Championship at the venerable Old Course at St. Andrews. On Tuesday morning he met the press for 25 minutes while sounding relaxed and confident, then strolled out the door for some practice.

But when assessing Woods’ chances, it really isn’t about Woods—it’s about you.

Your opinion matters, because when you sift through Tiger’s stats, mine his quotes and inhale the crisp Scottish air blowing in from the North Sea, you can find signs indicating this could be the week Woods ends his major-championship drought, raises the claret jug and shocks the world.

You can also find mounds of evidence that this Open is destined to be added to Woods’ ever-expanding list of major flameouts.

Here are a few of those clues, along with the opposing arguments.

Woods will win this British Open because he got his confidence back at his most recent event, The Greenbrier Classic, where he tied for 32nd place.

Woods won’t win this British Open because he was a disaster at the most recent major, the U.S. Open at Chambers Bay, where he missed the cut.

A T32 is not the kind of finish that typically gets Woods juiced. But after bumbling through 36 holes at Chambers Bay, there was something different about him at The Greenbrier (besides a weekend tee time). In fact, Woods may have had one of the best ballstriking weeks of his career.

“It was the first time I had led proximity to the hole with my iron play in I don’t know how many years,” Woods said, “so that was a very, very good sign. And as bad as I putted that week, I was only four shots out of a playoff.”

Woods also offered a reminder that he began a new round of swing changes at the Memorial, where he made the cut but shot a miserable 85-74 on the weekend. Woods called that alteration a “baseline shift,” a term that must mean something to him, but again, this isn’t about Tiger.

The counterpoint is that Tiger crashed out of Chambers Bay in a firebomb of wayward drives, fanned irons and fluffed putts. He finished 151st in a field of 156. It was his 14th missed cut, a number that matches his career major titles.

This season he hasn’t played enough competitive rounds to qualify for the PGA Tour’s seasonal rankings, but if he did, he would rank 96th in putting, 194th in driving accuracy and dead-last in scrambling. This week his world ranking skidded to 241, where his name is sandwiched between South Korea’s Ikjae Jang and England’s Paul Waring. That’s one thing about golf: you can think you’re at rock bottom, but there’s always a name even lower on the list.

Woods will win this British Open because he owns the Old Course, where he overflows with the good vibes that come from being a two-time Open champion at this venue.

Woods won’t win this British Open because this week the Old Course is nothing like the version he once dominated.

Woods clearly digs this place. In four previous St. Andrews Opens he’s won twice, in 2000 and 2005, for a Hall-of-Fame batting average of .500. When asked if he still feeds off those memories, Woods didn’t blink, offering a quick “absolutely.” St. Andrews also has an aura, a feeling, and Woods has found a way to tap into it when he tees up here.

“I’ve always loved this golf course, from the first time I played it back in ’95, so it’s just something special about it. It’s nice to be out there on the course and see it and feel it again, and to be able to hit all the shots,” he said.

You may also like British Open 2015: What the Pros Are Wearing at St Andrews

But Mother Nature has a new plan for the Old Course this week, and it will play much differently from previous Opens. A month of rains have transformed the track from burnt and brisk to lush and leisurely. The greens are—wait for it—green. Woods said his approach shots have been leaving pitch marks, a phenomenon he could only recall seeing once before, at the 1998 Dunhill Cup. Woods spoke about his familiarity with sight-lines and wind directions, but fresh conditions on the ground could help players who haven’t seen much of the place. And those not accustomed to the bump-and-run game may be able to navigate the track without having to try as many of those unfamiliar shots.

Woods will win this British Open because he is healthy and confident.

Woods won’t win this British Open because he is old and broken.

At last, we arrive at the crux of the debate: whether Woods is building a swing and a body for another great run, or if he’s deep into a tailspin toward irrelevance. On Tuesday Tiger said he’s healthy and that the swing change is taking hold. He also clearly dropped some weight this season, likely a diet-and-exercise shift designed to take some strain off his cranky back.

But to win a 15th career major on a fourth career swing would be historic. Woods has battled numerous ailments, and it’s impossible to predict if his body will hold up long enough to allow him to regain his competitive form. Even at the Masters, where he finished 17th for his only top-20 of the season, Woods injured his wrist while striking a tree root in the final round and winced for several holes, sounding alarms of a possible WD. Tuesday Woods was asked if, in the darkest moments of this season, he had considered retirement.

“I don’t have an AARP card yet, so I’m a ways from that. I feel like my body is finally healed up from the surgery from last year,” he said.

A follow-up question brought a rare thing from Tiger: a direct answer.

“I know some of you guys think I’m buried and done, but I’m still right here in front of you. I love competing, and I love playing these events.”

Tiger was right. He was sitting right there before hundreds of media from around the world, all wondering if the former champion really does have a shot this week.

What do you believe?